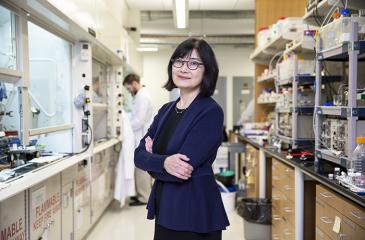 A decades-long collaborative research effort that determined that a lower dose of nicotine in cigarettes led to a reduction in cigarette smoking, exposure to carcinogens and dependence, and an increase in attempts to quit has finally paid off. Led by Dorothy Hatsukami, PhD, Professor of Psychiatry and Behavioral Sciences, and co-principal investigator Eric Donny, from Wake Forest University, their research studies contributed to leading  the Food and Drug Administration (FDA) to potentially set a maximum allowed nicotine level in cigarettes and possibly other tobacco products.

“Reducing nicotine in cigarettes will prevent future generations from becoming addicted to smoking and help smokers quit smoking more easily,” noted Dr. Hatsukami. “It has been estimated that over 8 million lives could be saved from tobacco-caused death by the turn of the century.”

The University of Minnesota has long been a leader in tobacco research, with previous studies that characterized nicotine dependence, developed effective quit smoking treatments,, contributed to an indoor smoking ban in 2007, and evaluated many tobacco products including e-cigarettes. The Tobacco Research Programs was created in the 1980s by Dr. Hatsukami and colleagues to combat the tobacco crisis facing the United States and the world.

“Cigarettes are the rare legal product that kills people when used as instructed,” said Samir S Khariwala, MD, MS, who is a colleague of Dr. Hatsukami, in a recent press release. “Thus, further regulation is needed to remove nicotine and carcinogens from tobacco products.”

The proposed FDA rule, which would reduce youth tobacco use, addiction, and death, would be initiated as early as 2023, according to some reports.

Read our previous article about Dr. Hatsukami’s research in this area here: https://cancer.umn.edu/news/putting-out-cigarettes

The Masonic Cancer Center, University of Minnesota, is the Twin Cities’ only Comprehensive Cancer Center, designated ‘Outstanding’ by the National Cancer Institute. As Minnesota’s Cancer Center, we have served the entire state for more than 30 years. Our researchers, educators, and care providers have worked to discover the causes, prevention, detection, and treatment of cancer and cancer-related diseases. Learn more at cancer.umn.edu.

About the University of Minnesota Medical School

The University of Minnesota Medical School is at the forefront of learning and discovery, transforming medical care and educating the next generation of physicians. Our graduates and faculty produce high-impact biomedical research and advance the practice of medicine. We acknowledge that the U of M Medical School, both the Twin Cities campus and Duluth campus, is located on traditional, ancestral and contemporary lands of the Dakota and the Ojibwe, and scores of other Indigenous people, and we affirm our commitment to tribal communities and their sovereignty as we seek to improve and strengthen our relations with tribal nations. For more information about the U of M Medical School, please visit med.umn.edu.