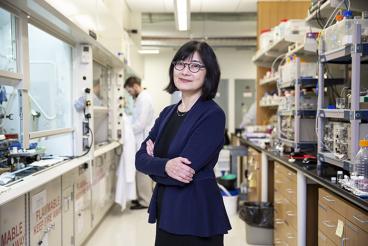 In the mid-1990s, University of Minnesota graduate Jack Henningfield (’74 BA, ’77 PhD) and a colleague published an article in the New England Journal of Medicine theorizing that if nicotine levels in cigarettes were reduced below a certain threshold, they would no longer be addicting. It was an intriguing premise—but largely unproven and unlikely to be tested by the companies that made cigarettes.

In 2009, however, Congress passed the Tobacco Control Act, giving the U.S. Food and Drug Administration (FDA) the authority to regulate tobacco products, including the amount of nicotine in cigarettes.

Around the same time, Masonic Cancer Center member and tobacco researcher Dorothy Hatsukami, PhD, a UMN professor of psychiatry, convened a meeting of tobacco control researchers, policymakers, and government agencies to assess the feasibility of reducing nicotine in cigarettes as a national policy measure.

While the science supported such an approach based on results from prior studies conducted by Hatsukami and others, more research was needed. Would lowering the amount of nicotine reduce addiction? And what reduction was required to do so?

In 2013, Hatsukami co-led a year-long study of 840 smokers at 10 sites across the United States. Researchers provided participants with cigarettes that either matched the nicotine levels of their preferred brand, or switched them with one of five investigational cigarettes with lower nicotine levels—a reduction that ranged from 66 percent less to 98 percent less. Participants in the double-blind study were asked to track the number of cigarettes they smoked each day for six weeks.

On average, the study showed, participants given lower-nicotine cigarettes smoked less per day at the end of the six weeks. “Cigarettes with lower nicotine content, as compared with control cigarettes, reduced exposure to and dependence on nicotine, as well as craving during abstinence from smoking,” the study’s authors wrote. This study was published in the New England Journal of Medicine last fall.

Quit attempts were most likely to occur when the nicotine content dropped to 0.4 mg per gram of tobacco, Hatsukami says. That level (roughly 2 percent of the nicotine dose found in a regular cigarette) no longer delivered enough nicotine to the brain to make smokers want to smoke more cigarettes.

“If you reduce dependence on cigarettes, then you are likely to reduce the number of people who smoke,” Hatsukami says.

Hatsukami’s research group is now looking at whether it would be best to reduce nicotine content in cigarettes to minimally addictive levels immediately or more gradually. Then, she adds, with the mounting research data, it will be up to the FDA to decide if, when, and how to enact standards for lower nicotine levels in cigarettes.