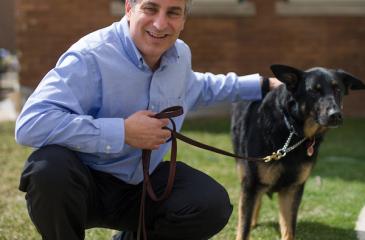 As Jim Valvano was accepting the Arthur Ashe Courage and Humanitarian Award at the inaugural ESPYS on March 4, 1993, he said “Don't Give Up . . . Don’t Ever Give Up!”® His words have inspired a generation, and the V Foundation for Cancer Research was born that night. The organization has since provided over $225 million in cancer research grants nationwide.

Jaime Modiano, VMD, PhD, a College of Veterinary Medicine and Masonic Cancer Center expert in comparative medicine, has been awarded a grant by the V Foundation, totaling $600,000 over three years for his study “Novel Immunotherapy for Sarcomas using Combination Oncolytic VSV and IL-18 Superkine."

“We are delighted to follow in the steps of Coach Valvano and the fight against cancer. His words continue to be an inspiration in our quest to create a world where we no longer fear cancer,” said Modiano.

This is the fifth V Foundation grant awarded to a researcher at the University of Minnesota and the first since 2015. Modiano’s grant will help facilitate the transition of sarcoma research from the lab to the clinic.

According to Modiano, sarcomas are cancers of the bone and connective tissue. While they are not common in people, they are no less serious than other, more common cancers. One reason thereare few new treatments for sarcomas is that their rarity makes it difficult to obtain material for study.

To overcome this issue, Modiano’s group has studied sarcomas in animals, especially in pet dogs. Dogs share the same environment as humans and their risk of developing cancer is about the same as it is for people. But unlike people, dogs develop sarcomas more frequently. Over the past 20 years, Modiano and his colleagues have found how sarcomas of dogs are similar to sarcomas of people. This creates opportunities to develop new sarcoma treatments in dog patients to help dogs and humans alike.

About the University of Minnesota College of Veterinary Medicine
As one of the nation’s leading programs, the College of Veterinary Medicine graduates about 100 new DVMs each year while conducting groundbreaking research and operating one of the nation’s largest veterinary teaching hospitals, a leading veterinary diagnostic laboratory, and the world-renowned Raptor Center. Learn more at vetmed.umn.edu.