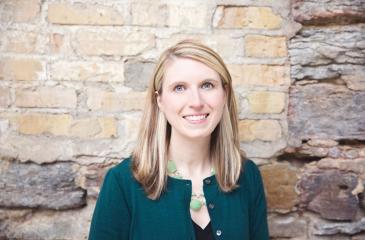 Helen Parsons, PhD, MPH, was named the 2020 Order of the Eastern Star Scholar, an honor recognizing her commitment to the Masonic Cancer Center and to the Order’s extraordinary commitment to supporting the development of novel therapies and new treatments in the quest to cure cancer.

Dr. Parsons, an Associate Professor in the University of Minnesota School of Public Health, focuses much of her research on cancer survivorship and public policy around health care.

“It is an honor to be selected as an Order of the Eastern Star Scholar,” said Dr. Parsons. “I feel fortunate to be able to use this opportunity to work in collaboration with our providers to understand the needs of our cancer survivors and use their experiences to improve outcomes for the future.”

Dr. Parsons, a Minnesota native, received her PhD and MPH from the University of Minnesota School of Public Health. Prior to that she received her bachelor’s degree in Government from Dartmouth College. She was awarded the Presidential Distinguished Junior Research Scholar Award from the University of Texas Health Science Center in 2016 and the Michael Kamin Hart Award of Excellence in Caring for Adolescents and Young Adults with Cancer from the Princess Margaret Cancer Centre, Toronto, in 2013.

The Order of the Eastern Star (OES) is a Masonic organization to which both men and women may belong. Worldwide, there are 300,000+ OES members representing chapters in the United States, Canada, Peru, Brazil, Germany, Italy, and other countries. The Minnesota Grand Chapter has a membership of 5,500 and has been very active in its support of the Masonic Cancer Center.

The Masonic Cancer Center, University of Minnesota, is the Twin Cities’ only Comprehensive Cancer Center, designated ‘Outstanding’ by the National Cancer Institute. As Minnesota’s Cancer Center, we have served the entire state for more than 25 years. Our researchers, educators, and care providers have worked to discover the causes, prevention, detection, and treatment of cancer and cancer-related diseases. Learn more at cancer.umn.edu.

About the University of Minnesota School of Public Health

The University of Minnesota School of Public Health is one of the premier schools of public health in the world. Since 1944, its faculty, staff, and students have brought innovative thinking and concrete action to emerging and persistent challenges, including structural racism, gun violence, an expanding aging population, and a changing climate. Located in one of the largest metropolitan areas in the U.S., it prepares some of the most influential leaders in the field, and provides the knowledge health departments, communities, and policymakers need to make the best decisions about population health.