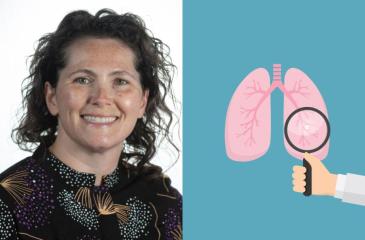 Did you know that November is National Lung Cancer Awareness Month? According to the Centers for Disease Control and Prevention, lung cancer is the leading cause of cancer death, accounting for 23 percent of all cancer deaths.

Who is at risk of developing lung cancer, what are the symptoms, and just how important is screening and early detection in reducing the lung cancer burden for Minnesotans? In this blog, Masonic Cancer Center (MCC) member Dr. Abbie Begnaud, MD, with the University of Minnesota Medical School and M Health Fairview answers your questions on the symptoms, risk factors, and treatment for lung cancer.

Q: Who is at risk of developing lung cancer?

Dr. Begnaud: Anyone can get lung cancer. Long-term exposure to environmental agents like cigarette smoke, smog, or radon can put people at higher risk. Substances found at some workplaces can also increase risk such as asbestos, arsenic, diesel exhaust, and some forms of silica and chromium. For many of these substances, the risk of getting lung cancer is even higher for those who smoke cigarettes. Radon is a naturally occurring gas that you can’t smell, see, or taste. It is common, especially here in Minnesota—with the average radon level in our state three times higher than the average U.S. radon level—and can enter your home through the soil and remain trapped inside. The only way to know if this is happening is to test your home with kits available commercially or through the Minnesota Department of Health. What's more, people who have an immediate family member who has lung cancer are also at a higher risk of developing lung cancer. There are resources available, especially for those who are or have been a cigarette smoker, to calculate your personal risk for lung cancer.

Q: What are the symptoms of lung cancer?

Dr. Begnaud: Initially, there are usually none. That's because lung cancer can develop and grow in the lungs for some time before symptoms occur. By the time most people with lung cancer have noticeable symptoms, the disease is often advanced. People with lung cancer might experience coughing, chest discomfort, difficulty breathing, or weight loss. Because there are usually no early symptoms of lung cancer, people who have been cigarette smokers for years might benefit from screening for lung cancer—even if they aren't presenting any symptoms. Lung cancer screening is a low-dose computed tomography scan—more often called a CT or CAT scan—to look at the lung tissue. The test takes just a few minutes and requires no fasting, no prep, and no IV. It’s the easiest of all currently available screening tests.

Q: What are the treatment options for lung cancer?

Dr. Begnaud: Broadly, treatment includes surgery to remove the cancer, radiation treatment, and systemic therapy or medications. The best chance for cure is with surgical removal, if possible. Recent advances in lung cancer treatment have revolutionized the field. Some lung cancers will have targets for treatment and/or mutations that contributed to the cancer and can be directly blocked to shrink or destroy the cancer. These newer targeted therapies are easier to take and more effective than traditional chemotherapy. In addition, immunotherapy—a new class of treatment with drugs approved since 2015—allows the body’s immune system to recognize and fight cancer cells. More than 20 new drugs have been approved in the last two years! We have more promising treatments for lung cancer today than we ever have.

Dr. Begnaud: The impact of early screening is dramatic. Lung cancer that is diagnosed very early at stage 1 may have an 80 to 90 percent chance of cure, which is why screening is so important. Even more advanced lung cancer outcomes are improving with new treatments.

Q: What are you doing to advance lung cancer research?

Dr. Begnaud: My work focuses on improving access to lung cancer screening, which is a relatively new preventive care service. Preventive care refers to types of care that help detect or stop serious diseases and medical problems before they can become major. We estimate that only eight percent of people who are eligible for lung cancer screening have actually been screened. Meanwhile, other cancer screening services like mammography—a technique using X-rays to diagnose and locate tumors of the breasts—see more than 70 percent of eligible people get screened. In addition, lung cancer is a disease that disproportionately affects some groups in Minnesota such as African Americans and American Indians/Alaska Natives. I am studying how we can improve the disproportionate impact of lung cancer on these groups of people.

Abbie Begnaud, MD, is an associate professor in the University of Minnesota Medical School on the Twin Cities campus and a critical care physician with M Health Fairview. She is also a Masonic Cancer Center member. She studies lung cancer early diagnosis and disparities in lung cancer outcomes.