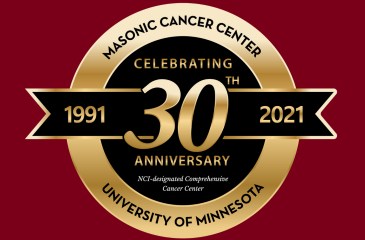 The Masonic Cancer Center’s more than 600 researchers with over $70M of direct research funding continue to study and understand biological and behavioral factors that can cause cancer, and are working to reduce behaviors that may lead to cancer and to enhance behaviors that decrease cancer risk. From tobacco, to food, to tanning, to environmental exposure, Masonic Cancer Center researchers, including those at all UMN campuses and the Hormel Institute, are working together to reduce cancer’s burden on Minnesota.

“We truly are Minnesota’s Cancer Center,” noted Douglas Yee, MD, Director of the Masonic Cancer Center since 2007 and Professor of Medicine and Pharmacology at the Medical School. “Being based in a land grant University, our research, care, and education serve the entire state of Minnesota. We have worked directly for and with the taconite miners of the Iron Range in northern Minnesota, farmers and ranchers of Greater Minnesota, across the 11 sovereign American Indian nations on the reservations and in the cities, with our area Hmong and Somali immigrant communities, and throughout the changing communities in our urban and suburban areas. We have impacted our state, region, and the world, all with Minnesota grit, determination, and values. And through the Minnesota Cancer Clinical Trials Network, we’ll bring this research to every Minnesotan.”

Since 1955, when the Masons of Minnesota raised $1 million to build the first 80-bed cancer-specific hospital, the University of Minnesota has been a pioneer in cancer research and therapy. Establishment of this hospital recognized the special kind of care cancer patients needed. Minnesota became a magnet for cancer care and research, and on August 24, 1968, immunologist Robert A. Good, MD, and a team of specialists performed the world’s first successful bone marrow transplant on young David Camp, transplanting donor marrow from his sister to help David develop healthy bone marrow and live a long life to this day.

This monumental feat pioneered an entirely new field of blood and marrow transplants (BMTs) that would open the door to cures for dozens of other life-threatening diseases and position the Masonic Cancer Center as a world leader in pediatric cancers and cancer survivorship. B.J. Kennedy, MD, who fostered the decades long partnership with the Masons, pioneered the use of medical therapy to treat cancer and is widely known as the 'father of medical oncology' for establishing it as a subspecialty of internal medicine. He made significant contributions to the medical management of cancers and trained a generation of leaders in the field of medical oncology.

John Bittner, PhD, was among the first to show that a virus could cause mammary cancers in mice, while Donald Gleason, MD, PhD, developed a scoring system for prostate cancer which has been used to help determine the aggressiveness of prostate cancer in millions of men and is still used to this day. Stephen Hecht, PhD, identified cancer-causing chemicals in tobacco smoke and has continued this work at the University of Minnesota, making the Masonic Cancer Center one of the foremost tobacco and nicotine research institutions in the world.

University of Minnesota teams have performed nearly 8,000 BMTs since that first one in 1968, primarily for the treatment of leukemias, myelomas, and other blood-related cancers, including the first transplant to treat a patient with lymphoma in 1975. Today, teams of Masonic Cancer researchers are enhancing CAR-T treatments and leveraging the Minnesota-discovered Tri-Specific Natural Killer Engager (TriKE) molecules for off-the-shelf cancer treatments to train and supercharge the immune system to fight malignancy. These discoveries have been made by cross-functional teams of laboratory scientists and their clinician partners, working together to translate discoveries into clinical trials and then into clinical practice.

"The Masonic Cancer Center epitomizes the kind of stellar research that occurs when innovative scientific advances are linked to challenging clinical problems," said Jakub Tolar, MD, PhD, Dean of the Medical School and Vice President for Clinical Affairs. "Innovation is catalyzed by the Masonic Cancer Center scientists and clinicians who are committed to reinventing the future and working together to do so."

Officially, via a proclamation from then Minnesota Governor Arne Carlson, along with a grand-opening ceremony led by then University President Nils Hasselmo and John Kersey, MD, the inaugural Director of the University of Minnesota Cancer Center, the first cancer research center in the Twin Cities opened on August 21, 1991.

"Minnesota Masonry has supported cancer research, treatment, and care at the University since 1955 with the building of the Masonic Memorial Hospital," said Eric J. Neetenbeek, President and CEO of Minnesota Masonic Charities. "We are proud to have been part of the transformative work that has been done over the past three decades to end the scourge of cancer through research and treatment at Masonic Cancer Center."

State-of-the-art cancer treatments that were once unimaginable are now available at M Health Fairview hospitals and clinics as a result of Masonic Cancer Center researchers’ ability to translate laboratory and pre-clinical findings into new therapies for cancer care.

“We bring together experts from all over the University and across the state to tackle cancer from every angle,” said Dr. Yee. “Basic science researchers collaborate to understand what drives cancers. Population scientists examine the factors associated with cancer risk. Then our clinical investigators develop strategies to connect the dots in screening, prevention, treatment, and survivorship of the major disease types. And community experts advise all of us to recommend strategies to address the unique research and care needs of the diverse populations of Minnesotans. This is truly bench to bedside research, and we are leading the way.”