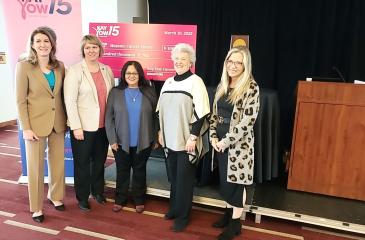 Minneaplis, MN (March 30, 2022) — The Kay Yow Cancer Fund® has awarded a $100,000 cancer research grant to Dr. Deepali Sachdev of Masonic Cancer Center for research in the area of Triple Negative Breast Cancer with an emphasis on its disproportionate effects on Black women.

“My research group is appreciative of funding from the Kay Yow Cancer Fund. Triple-negative breast cancer (TNBC) in Black women and men is aggressive and needs new therapeutic options to reduce mortality,” said Sachdev.  “With this funding, we will test if a novel immunotherapy drug will kill TNBC cells in preclinical models established from Black women and men with TNBC.”

“It was Coach Yow’s wish that the Kay Yow Cancer Fund award a grant annually in the host city of the Women’s Final Four on behalf of the sport of women’s basketball,” said Glance. “We are thrilled to fund Dr. Sachdev’s life-saving work in the area of Triple Negative Breast Cancer (TNBC). We know there is such a significant need for this type of research as TNBC is an aggressive form of cancer, with an increased mortality rate that disproportionately affects Black women.”

“Throughout her life, Coach Kay Yow demonstrated unparalleled leadership on and off the basketball court, impacting the lives not only of  those student-athletes who played for her but also those throughout her community,” said Holzman. “For the past 15 years, the Kay Yow Cancer Fund has continued her work by leaving a lasting legacy in the communities that welcome the entire women’s basketball community for the Women’s Final Four, and we are thrilled to continue this partnership here in Minneapolis.”

About the Kay Yow Cancer Fund

The Masonic Cancer Center, University of Minnesota, is the Twin Cities’ only Comprehensive Cancer Center, designated ‘Outstanding’ by the National Cancer Institute. As Minnesota’s Cancer Center, we have served the entire state for more than 25 years. Our researchers, educators, and care providers have worked to discover the causes, prevention, detection, and treatment of cancer and cancer-related diseases. Learn more at cancer.umn.edu