Drug developed at University of Minnesota increases survival in dogs with cancer; shows potential for use in humans 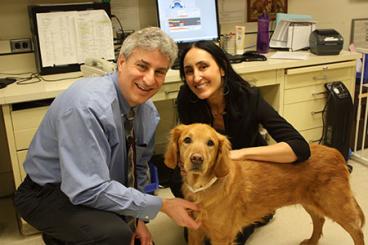 MINNEAPOLIS/ST.PAUL (February 13, 2017) – A breakthrough trial at the University of Minnesota testing a new UMN-developed drug resulted in improved survival rates for dogs diagnosed with a cancer called hemangiosarcoma (HSA). The results were published today in the journal Molecular Cancer Therapeutics.

Canine HSA is a common, aggressive, incurable sarcoma. It is remarkably similar to angiosarcoma, which affects humans. Both cancers typically spread before diagnosis and the survival time for affected patients is extremely short, even with aggressive treatment. Only 50% of humans diagnosed with angiosarcoma live longer than 16 months and the prognosis for dogs with HSA is similarly dire: less than 50% will survive 4-6 months and only about 10% will be alive one-year after their diagnosis.

“eBAT was created to specifically target tumors while causing minimal damage to the immune system. HSA is a vascular cancer, meaning it forms from blood vessels. eBAT was selected for this trial because it can simultaneously target the tumor and its vascular system,” said Vallera.

Traditional cancer treatments have side effects that can be very hard on patients. “In this trial we aimed for a sweet spot by identifying a dose of eBAT that was effective to treat the cancer, but caused no appreciable harm to the patient. Essentially we’re treating the cancer in a safer and more effective way, improving quality of life and providing a better chance at survival,” lead study author A ntonella Borgatti, D.V.M., M.S., associate professor with the University of Minnesota College of Veterinary Medicine said

eBAT was tested on 23 dogs of various breeds, both large and small, with HSA of the spleen. Dogs received three treatments of eBAT after surgery to remove the tumor and before conventional chemotherapy. The drug treatment improved the 6-month survival rate to approximately 70%. Furthermore, five of the 23 dogs that received eBAT treatment lived more than 450 days.

The positive results for canine patients, the similarities between this cancer and angiosarcoma in humans, and the fact that many other tumor types can be targeted by eBAT, make a strong case for translating this drug into clinical trials for human cancer patients. The researchers want these results to bring hope to those touched by this disease.

“This drug was invented here at the University of Minnesota, developed here, manufactured here, tested here and showed positive results here. We would also like this drug to achieve positive outcomes for humans here,” Modiano said.

“The ultimate goal for all of us is to create a world in which we no longer fear cancer,” Modiano said.

This project is an example of the remarkable progress that is being made through collaborations among the multiple colleges and schools within the University of Minnesota’s Academic Health Center.

Funding was provided by many sources, including various foundations and individuals along with the National Institutes of Health, showing the broad interest in identifying cures for these devastating cancers.

Masonic Cancer Center, University of Minnesota is a Comprehensive Cancer Center designated by the National Cancer Institute. For more than 25 years, researchers, educators, and care providers have worked to discover the causes, prevention, detection, and treatment of cancer and cancer-related disease. Learn more about the Masonic Cancer Center at cancer.umn.edu.

The University of Minnesota Medical School, with its two campuses in the Twin Cities and Duluth, is a leading educator of the next generation of physicians. Our graduates and the school's 3,370 faculty and affiliate physicians and scientists advance patient care, discover biomedical research breakthroughs with more than $177 million in sponsored research annually, and enhance health through world-class patient care for the state of Minnesota and beyond. Visit w ww.med.umn.edu to learn more.