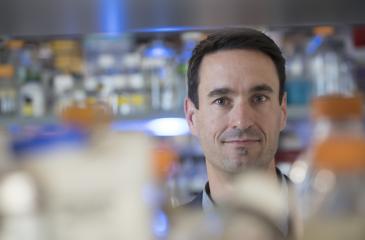 The renowned actor Sidney Poitier died of heart failure in January at age 94.  He lived for nearly three decades following treatment for prostate cancer at age 66.  Based on modeling estimates published a week after his death, nearly 270,000 men in the U.S. will be diagnosed with prostate cancer and 34,500 will die from the disease this year.  Though Poitier was successfully treated, a testament to advances in therapies and patient monitoring, Black men like Poitier are at higher risk for developing and dying from the disease.

In contrast to Poitier, best-selling author and Saint Paul native Vince Flynn died of an aggressive metastatic prostate cancer at age 47 three years after he was diagnosed in 2010.

LMP professor Scott Dehm said in an interview that men die of prostate cancer after it has spread beyond the prostate gland and become resistant to hormone therapy, what is termed castrate-resistant prostate cancer or CRPC.  “Many prostate cancer patients are cured by surgery or radiation because these treatments can eradicate early-stage disease and thereby prevent metastasis," said Dehm, a faculty member in the Masonic Cancer Center.   "If you’re looking at survival rates, patients diagnosed with localized prostate cancer have five-year survival of 99 percent and ten-year survival rates of 98 percent,” he said.  Metastasis, or the spreading of the cancer outside of the prostate, is really the serious event that precedes CRPC and that necessitates hormone therapy.  “All metastatic prostate cancer treated with hormonal therapy will eventually develop resistance and become CRPC,” Dehm said.

During the past decade, Dehm has tracked down the cellular, molecular, and genetic basis of CRPC focusing on the genes for androgen receptors, receptors that work in the nucleus of cells to regulate the gene expression programs that allow the body to respond to androgen hormones such as testosterone.  “We discovered the first androgen receptor gene rearrangement in a widely used prostate cancer cell line in 2011,” Dehm said.  “It was a single cell line – called 22Rv1 – and it’s been available from the ATCC cell line repository for decades.  Everybody in the field uses it.”