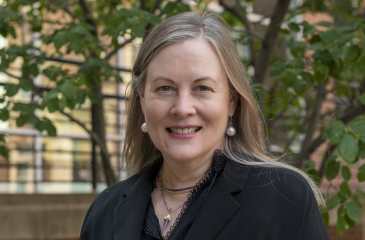 The Wall of Scholarship, located in the Phillips-Wangensteen Building, is a physical representation of the excellent research conducted at the University of Minnesota. The Wall was founded to promote research excellence and helps inspire faculty and students to do their best work. On November 9, 2022, Carol Lange, PhD, Professor in the Departments of Medicine and Pharmacology and Tickle Family Land Grant Chair of Breast Cancer Research at the University of Minnesota and Masonic Cancer Center was added to the Wall of Scholarship.

Wall of Scholarship honorees must meet the following criteria: They are first or last authors with a current primary appointment in the Medical School whose work has been cited over 1,000 times, according to at least two of the three major academic indices—Google Scholar, Scopus, and Web of Science. The Wall is reviewed annually in the fall.

Dr. Lange began her first paper (Lange-Carter et. al, Science, 1993) as a postdoctoral fellow in the Gary L. Johnson Lab at National Jewish Center for Immunology and Respiratory Medicine (Denver, Colorado), where she discovered and cloned a new gene that encodes a protein kinase she and Dr. Johnson named MEKK1 in mammalian cells based on presumed conservation with yeast genes (PMID 385802).

“It was so exciting to see the results," says Lange. “I remember sitting on New Years Eve waiting for results with Dr. Johnson and other lab members standing all around me—our first kinase assay to see if indeed it was the kinase we were looking for—and it was!”

Lange’s discovery was critical to our modern understanding of cell signaling by highly conserved MAPK “modules” as 3-kinase cascades that function successively to pass signals through the cell and provided a foundation for their extensive exploration in both normal and disease processes, including cancer.

In 1995, during her 3.3-year tenure in the Johnson Lab, Lange contributed to 14 peer-reviewed publications. That August, her NIH National Research Service Award-supported postdoctoral position was abruptly terminated. Her lab notebooks were confiscated and later her work was patented and licensed without her consent.

“While this event was truly devastating and a blatant attempt to sabotage my early career, the work still speaks for itself,” states Lange. “This inequity empowered me to become a trainee advocate and shaped my desire to redirect my time and talent to focus on understanding how MAPKs inform and direct steroid hormone receptor (SR) actions in women’s cancers, the focus of my independent research career at the University of Minnesota's Masonic Cancer Center.”

Dr. Lange sees this experience as a defining event for the scientist and leader she is now. “I am a strong woman scientist, a woman’s advocate, and someone who stands for gender equality, diversity, and fairness in the workplace and everywhere. I work hard to eliminate hierarchy in my lab and my organization—I feel everyone has a valuable voice and a contribution to make.”

Join us in congratulating Dr. Lange for this achievement, and read more about Dr. Lange’s work.