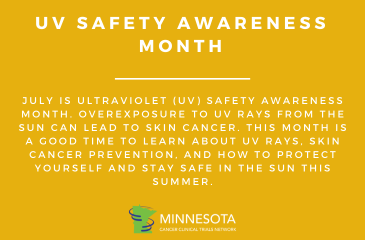 July is Ultraviolet (UV) Safety Awareness Month in the United States. This is a good time to learn about UV radiation and the effects that exposure to UV radiation has on the body, as well as ways to protect yourself and prevent sunburns, sun damage, and skin cancer.

UV radiation is a form of invisible radiation that comes naturally from the sun’s rays. UV radiation can also be used in an artificial form in tanning beds and sunlamps, and less commonly in certain types of lights and lasers. While UV radiation offers some benefits, such as Vitamin D, overexposure can lead to health risks to the skin and eyes, such as sunburn, skin cancer, and eye diseases such as cataracts and macular degeneration.

There are three different types of UV rays: Ultraviolet A (UVA), Ultraviolet B (UVB), and Ultraviolet C (UVC). UVA rays are the most prevalent UV radiation on Earth because they are not absorbed by the ozone layer. UVA rays penetrate deeply into the skin. They can cause premature aging of the skin, fine lines, and wrinkles and play a role in some skin cancers. UVA rays are consistent throughout the year and are strong even on cloudy days. Tanning beds mostly emit UVA rays.

UVB rays are partially absorbed by the ozone layer and atmosphere but some still reach Earth’s surface. The intensity of UVB rays fluctuates over time, with the strongest UVB rays occurring from late-morning to mid-afternoon from spring to fall. However, damage can still occur from exposure year round. UVB rays penetrate the outer layers of the skin, causing damage to skin cells. UVB rays are the main case of sunburn, thickening of the skin, and most skin cancers such as melanoma. UVB rays can also damage the eyes and immune system.

UVC rays are the strongest UV rays. However, UVC rays do not reach the Earth’s surface and are blocked by the ozone layer. UVC rays are only used in artificial sources, such as sunlamps and lasers. UVC rays penetrate the outermost layer of the skin, but they can cause severe burns and damage to the skin and eyes in just a few seconds. This damage usually resolves in about a week and typically doesn’t cause long-term damage or health risks.

Skin cancer is the most common type of cancer in the United States and in the world. 1 in 5 Americans will develop skin cancer by age 70. Prolonged exposure to UV rays increases your risk for skin cancer, such as basal cell carcinoma, squamous cell carcinoma, and melanoma (the most deadly form of skin cancer). This is because UV rays can damage the DNA in cells, leading to cell changes, mutations, and uncontrollable cell growth. The body can repair some of this damage but not all, and damage that is not repaired builds up over time, increasing the risk of skin cancer.

You can protect yourself from UV rays and lower your risk of getting sunburns and developing skin cancer by using sunscreen. Sunscreen works by preventing UV rays from penetrating the skin in different ways. Physical sunscreens use minerals that reflect UV rays back. Chemical sunscreens use specific chemicals that absorb UV rays and undergo a chemical reaction, transforming the UV rays into heat and releasing them. Other prevention strategies include limiting time in the sun, staying in the shade, not using tanning beds or booths, wearing a sunhat and sunglasses outdoors, and covering your skin with long sleeves and pants.

It was long suspected that sun exposure was related to melanoma risk, as well as other skin cancers, and there was circumstantial evidence to support this. Higher skin cancer incidences and mortality were observed in Caucasian people in areas closer to the equator and in areas with stronger and prolonged sun exposure, like Australia and New Zealand. Skin cancer rates also increased as tanning became more popular and fashion choices changed to have more skin exposed to sunlight. Furthermore, skin cancer rates were higher in outdoor workers. However, it wasn’t until the 1980s that conclusive studies were published that linked UV radiation exposure to melanoma.

A study published in 1982 examined how sun exposure may be related to melanoma by having 113 melanoma patients fill out questionnaires. The questionnaires included questions about hair color, eye color, skin color, typical skin response to sun exposure (such as whether a person burns, tans, both, or neither), time spent in warmer climates, and history of sunburns. A computer program was used to analyze the results and estimate risk. These results were then compared to those of a control group of 113 people without melanoma with the same age and gender distribution. The study found that 56 percent of melanoma patients had a history of severe sunburns compared to just 22 percent of the control group. This was the first study to demonstrate a clear connection between sun exposure, history of sunburns, and melanoma.

As a result of these studies, many health organizations, such as the World Health Organization (WHO), Food & Drug Administration (FDA), and American Academy of Dermatology, have recommended people avoid indoor tanning, especially younger people. As of 2022, 44 states in the United States have passed laws banning or regulating indoor tanning for people under 18. Minnesota was the eighth state to ban indoor tanning for minors in 2014, a decision that was based in part on research from the Masonic Cancer Center, University of Minnesota. Indoor tanning rates have decreased as a result, but 7.8 million Americans still engage in indoor tanning.

As a result of legislation and increased awareness of the danger of indoor tanning and UV radiation, melanoma and other skin cancer rates are decreasing in some groups, especially in those under 30. This month and all year, make sure you are engaging in UV safety by staying in the shade, using sunscreen (SPF 30 or higher is best), and not using indoor tanning beds or booths. To learn more about sun safety, skin cancer, and sunscreen, check out MNCCTN’s previous article on sun protection and sunscreen research.