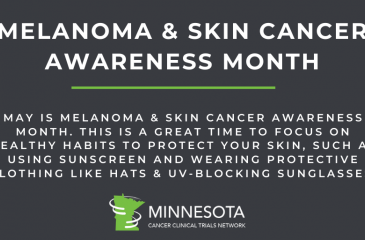 Melanoma is the most serious and deadly form of skin cancer. It can spread rapidly if not found and treated early. Melanoma develops in melanocytes, the cells that produce melanin, a pigment that gives skin its color. While the exact cause is not known, exposure to ultraviolet (UV) radiation from sunlight or tanning beds increases the risk of developing melanoma.

Minnesota is one of the states with the highest melanoma rates. Melanoma rates in the United States doubled from 1982 to 2011 and have continued to increase in recent years. More than 100,000 Americans will be diagnosed with melanoma in 2020.

Melanoma is preventable with lifestyle changes. Limiting sun exposure and not using tanning beds are two key ways to reduce your risk. When you are in the sun, use protective clothing like a wide-brimmed hat, long sleeves and pants, and UV-blocking sunglasses. Sunscreen and sunblock are also extremely important in reducing your risk for all skin cancers.

In the 1800s, ultraviolet rays were discovered by scientists. Scientists realized that skin could be protected by filtering out ultraviolet rays. Chemist Eugene Schueller launched the first commercial sunscreen in 1936. In the 1940s, Benjamin Greene developed the well known brand Coppertone, using coconut oil and cocoa butter. However, while Coppertone prevented sunburn, it did not block ultraviolet rays. Skin cancer was on the rise as a result.

In 1962, Franz Greiter developed a method to measure a substance’s ability to block ultraviolet rays. This is known as the Sun Protection Factor (SPF). SPF is now the standard to measure a sunscreen’s effectiveness. This breakthrough launched a sun protection market, a billion dollar industry today.

Today, sun protection is usually used in a sunscreen or sunblock form. Sunscreen is made of chemicals that block UV rays, such as oxybenzone and dibenzoyl methane. Sunblocks provide a physical barrier between the sun’s rays and the skin, using minerals like zinc oxide and titanium dioxide.

Sunblocks are generally considered to be more natural and less likely to cause allergic reactions than sunscreen, especially for people with sensitive skin. However, scientists and dermatologists agree that the best sunscreen to use is the one you will actually use, and use correctly! The American Association of Dermatology (AAD) recommends that a "broad spectrum" sunscreen (meaning it protects against ultraviolet A (UVA) and ultraviolet B (UVB) rays with an SPF of at least 15 that is applied daily to all sun exposed areas, then reapplied every two hours.