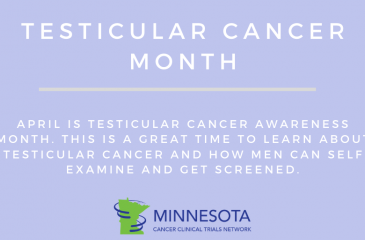 The success rate of testicular cancer treatments, especially in advanced disease, are largely due to platinum combination chemotherapy, which was discovered through clinical trials. Before this discovery, advanced testicular cancer was fatal in most cases.

In the 1960s, testicular cancer that had metastasized, or spread to other parts of the body, had a 90 percent death rate within one year of diagnosis. This alarming statistic led scientists to look for new treatments for advanced cancers.

In 1965, platinum was determined to be a key substance for chemotherapy. This was the most significant discovery in the history of testicular cancer research, and has also helped in the treatment of many other cancers as well.

This was great news for cancer research because cellular division is how cancer cells spread in the body and form tumors. If researchers were able to stop cellular division, they could slow down or even stop the growth of tumors and spread of cancer in the body.

Researchers then had to develop a drug based on the platinum research by Rosenberg et al. The drug was called cisplatin. In a Phase I study published in 1974, researchers looked at the effects of cisplatin on 11 patients with testicular cancer. Nine of the patients responded to cisplatin, including several complete responses. A complete response is the disappearance of all signs of cancer in response to treatment. This was an unprecedented result for a Phase I study.

Another study, published in 1977, looked at the effects of adding cisplatin to the regimen of vinblastine plus bleomycin, known as the PVB regimen. 47 testicular cancer patients were given the PVB regimen in four cycles. 33 of the 47 patients had complete responses to the treatment, and the patients had a five-year survival rate of 64 percent.

Based on these two studies, the Food & Drug Administration (FDA) approved cisplatin. Cisplatin has been revolutionary in the treatment of metastasized testicular cancer, curing more than 80 percent of patients with metastatic disease. This is compared to a 10 percent survival rate in the 1960s before the discovery of cisplatin. Cisplatin is also used in the treatment of other cancers, such as ovarian and bladder cancers.

Cisplatin continues to be studied today. Some studies look at reducing the side effects and toxicity of the treatment. Others look at how cisplatin may be used to treat other cancers and tumor types. To learn more about cisplatin and clinical trials, visit: https://www.cancer.gov/about-cancer/treatment/clinical-trials/intervention/cisplatin.