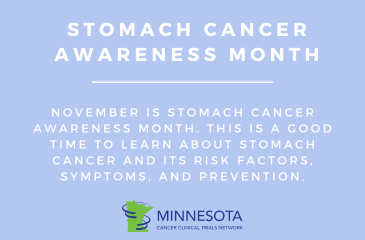 November is Stomach Cancer Awareness Month. This is a good time to learn about stomach cancer and its causes, risk factors, symptoms, treatment, and prevention. Stomach cancer, also known as gastric cancer, develops when cells in the stomach begin to grow uncontrollably. Stomach cancer tends to develop slowly over many years without symptoms, leaving cancer undetected.

Stomach cancer used to be one the leading cancers in the United States in the early 20th century. However, stomach cancer incidence has dropped significantly in recent years. Researchers believe this is largely due to increased food refrigeration, which decreases the amount of smoked and heavily salted foods we consume, and a decline in the number of people infected with Helicobacter pylori (H. pylori) bacteria. H. pylori is a major cause of stomach cancer, especially non-cardia cancers in the distal (lower) part of the stomach.

H. pylori is a bacteria that can enter the body and live in the stomach and digestive tract. People get H. pylori through contaminated food and water or contact with saliva or other bodily fluids of infected people. It is most common in areas of the world without sanitation and access to clean water, and about 60 percent of people in the world are infected with H. pylori.

The bacteria typically lives in the body for many years, attacking the stomach lining over time. This may damage the stomach lining enough for acid to get through, and in some people this can cause ulcers, or sores, to develop, as well as bleeding and other gastric symptoms. For others, H. pylori doesn’t cause any symptoms and may go unnoticed for years. If detected, H. pylori infection can typically be treated with antibiotics.

Prior to the discovery of H. pylori, researchers believed that ulcers were caused by spicy foods or stress. In 1982, Dr. Robin Warren, a pathologist in Australia, observed a small, curved bacteria growing in the lower stomach of patients with stomach biopsies, as well as inflammation in the stomach lining. With a colleague, Dr. Barry Marshall, Dr. Warren conducted a study examining stomach biopsies of 100 patients. The study found that the recently discovered bacteria was present in almost all patients with gastric inflammation and ulcers. Based on these results, Drs. Warren and Marshall proposed this bacteria, later named H. pylori, was responsible for ulcers and other gastric symptoms.

Their discovery was supported by future studies and animal models. But still, scientists were skeptical. Without an option to test their theories on people, Dr. Marshall decided to test the only person he could ethically recruit: himself! He drank H. pylori cultured bacteria in a broth, knowing he could later treat himself with antibiotics. He soon developed gastritis symptoms, such as stomach pain, bad breath, and vomiting, all precursors to ulcers. After 10 days, Dr. Marshall received an endoscopy and found the same H. pylori bacteria in his gut, proving the gastric symptoms were the result of H. pylori once and for all.

Research is ongoing to determine exactly how H. pylori increases stomach cancer risk. Scientists suspect that the ongoing inflammatory response that H. pylori causes may predispose cells to becoming cancerous but further research is needed. Researchers are also working to determine why H. pylori may lead to cancer in some individuals and not others, and if there may be a genetic component affecting risk, as well as if certain strains of H. pylori are more likely to cause cancer. Finally, researchers continue to work to find the best treatments for H. pylori and stomach cancer, as well as a vaccine for H. pylori infection, especially as antibiotic resistance has increased.