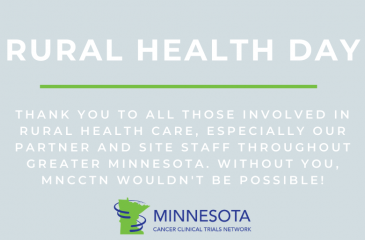 A Snapshot of Rural Health and Cancer in Minnesota

Thursday, November 19 is National Rural Health Day in the United States. This is a special day for the Minnesota Cancer Clinical Trials Network (MNCCTN). Our mission is to bring cancer clinical trials directly to clinics in rural areas in Minnesota. Today, and every day, we celebrate rural health and are so grateful for rural health care workers across Minnesota and at our MNCCTN sites.

In Minnesota, 27 percent of the population live in non-metro areas, and 8 percent live in isolated rural areas. On average, rural Minnesotans are older, have lower incomes, must travel farther for health care, and are more likely to have public health insurance compared to urban Minnesotans. While urban areas have larger non-white populations, an exception is American Indian and Alaskan Native populations, which are larger in rural areas in Minnesota.

While it is encouraging that cancer incidence rates overall are similar when comparing rural and urban Minnesotans, further work and outreach need to be done to address disparities in specific types of cancer, especially colorectal, lung, and cervical cancers. Further research must also be done to analyze why these differences exist and how they can best be addressed. Racial and ethnic disparities also need to be examined, especially for American Indian and Alaskan Native populations in rural Minnesota.

There are many factors and challenges that affect rural populations and health outcomes. Rural populations may have higher poverty rates, lower education attainment, and lack of access to health services. There are many barriers that people in rural areas face for health care access. Some of these barriers include transportation, proximity to health care facilities, finances, and health insurance.

When it comes to cancer, there are two important factors that affect cancer diagnosis and mortality in rural areas. The first is smoking. People in rural areas, including in Minnesota, are more likely to smoke cigarettes than urban populations. As a result, rural populations have more cases and more deaths for smoking-related cancers, such as lung and laryngeal cancers. Another important factor is screening. Rural communities have more barriers to getting screened, such as education and proximity or access to health care services. Because of these factors, rural populations have higher incidences of cancers that can be prevented or treated with screening and early intervention, such as colorectal and cervical cancers.

While there are many challenges and barriers that rural communities face when it comes to health care and cancer, there are opportunities as well. One of those opportunities is research. Research is important to understand rural populations’ needs and how to prevent cancer and improve health outcomes.

Clinical trials are an important treatment option for cancer, yet many Minnesotans do not participate due to barriers. The majority of patients who take part in research do so at academic centers in the Twin Cities and Rochester. However, much of the state’s population is found in rural areas, far away from research opportunities in metro areas.

MNCCTN brings clinical trials from the Masonic Cancer Center, University of Minnesota and Mayo Clinic Cancer Center directly to rural clinics so patients can participate in research close to home. This removes many barriers associated with rural health care that typically prevent many Minnesotans from participating in research, such as transportation, time away from work, childcare, finances, and more.

Thank you to our rural sites and health care workers. Without you, MNCCTN would not be possible. We’re so thankful for our partners and sites that make rural health care and research possible.

To learn more about MNCCTN and find a site close to you, visit mncancertrials.umn.edu. For more information on rural health and cancer in Minnesota, check out a recording of the Masonic Cancer Center’s Rural Health & Cancer Symposium from earlier this year here.