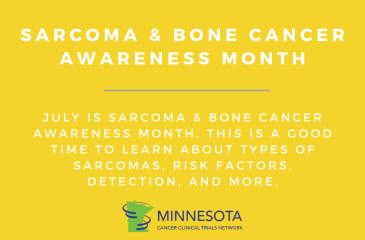 July is Sarcoma Awareness Month. Sarcoma is a rare cancer. As a result, sarcoma doesn’t get the attention or necessary research and funding that other more common cancers might get. This month is a good time to learn more about different types of sarcomas, risk factors, sarcoma research, and more.

Sarcomas are cancers that develop in connective tissues and may spread to other tissues or parts of the body. There are more than 70 different subtypes of sarcomas, but all sarcomas are divided into two main types: soft tissue sarcomas and bone cancers. Soft tissue sarcomas develop in muscles, fat, tendons, nerves, veins, arteries, or even within organs. These sarcomas are most often located in arms, legs, and the abdomen but can also occur in the head or neck. Bone cancers are found in bone or cells that form bone. Most bone cancers are found in long bones, such as leg or arm bones.

Because sarcomas are fairly rare in humans, clinical trials and research to learn about sarcomas and find the best treatments are also less common. It can be difficult for researchers to not only find research participants but to get the same level of interest and funding that other more prevalent cancers might. As a result, an interesting field of research has been growing to advance sarcoma research: comparative oncology.

Comparative oncology is the study of naturally occurring cancers in animals compared to those in humans in an effort to better understand the biology of disease, test new treatments, and find cures for humans and animals. This field brings together clinicians, veterinarians, and researchers to collaborate and improve health and outcomes for both humans and animals. Because the cancer studied in comparative oncology occurs naturally and spontaneously in animals rather than artificially in mice or other animals, studies are often more accurate and can make the drug development process faster. Some types of animals involved in this type of research are cats, horses, ferrets, and, most commonly, dogs.

Dogs are the most common animal in comparative oncology studies because humans and dogs share many similarities when it comes to cancer. Just like humans, dogs can develop brain, skin, lung, and bone cancers. Dogs also typically share the same living spaces as humans, so they are exposed to the same environmental factors that may cause cancer. Finally, humans and dogs often share the same genetic mutations that can lead to cancer as well as similar immune systems.

Sarcomas are much more common in dogs than in people, making comparative oncology a perfect fit for sarcoma research to benefit both dogs and humans. Other than the life stage at which sarcoma typically occurs due to dogs’ shorter lifespans, sarcomas in dogs and humans are virtually identical.

One main focus of comparative oncology studies involving sarcomas is developing new treatments for dogs that may also apply to humans. In 2017, University of Minnesota researchers developed a new drug that improved survival rates in dogs with hemangiosarcoma (HSA), an aggressive sarcoma that is very similar to angiosarcoma in humans. The drug, eBAT, targets tumors and their vascular systems while causing minimal damage to the body’s immune system.

The drug was tested on 23 dogs of various breeds and sizes with HSA of the spleen. The treatment improved the dogs’ six month survival rate to 70 percent. Five of the 23 dogs lived more than 450 days after receiving the treatment. This was a marked increase since typically only 50 percent of dogs with HSA live more than four to six months, and only 10 percent live for a year after diagnosis. Researchers hope studies like this will develop treatments that not only prolong life for dogs with sarcomas but can also quicken the drug development process for humans with similar types of sarcomas.

Another key part of sarcoma comparative oncology research is finding risk factors, including genetic patterns, for developing sarcomas and predicting how aggressive sarcomas may be, as well as determining prevention strategies.

Researchers have also examined prevention strategies, risk factors, detection, and treatments for canine HSA through the Shine On Study. This study follows dogs over three phases. Phase One of the study developed and refined a blood test to accurately detect HSA in dogs. Phase Two continued to use the blood test to see if HSA could be detected in dogs whose disease had returned. In Phase Three, the blood test was used to develop risk profiles for dogs, and eBAT was used to both prevent and treat HSA. During Phase Three, 209 dogs continued to be followed. While the study is ongoing, researchers have found that eBAT is safe for dogs. They have also found that if a dog received a negative blood test, the risk of the dog developing HSA over the next six months is less than one percent.

Osteosarcoma is another type of sarcoma that comparative oncology researchers are examining. The disease is difficult to predict in humans and dogs because the aggressiveness of the cancer and survival time differ from person to person and dog to dog. In 2011, a study examined gene patterns in dogs with osteosarcoma to determine if gene expressions differed according to severity of disease. Researchers used gene expression profiling to analyze tumor samples from 79 dogs with primary appendicular osteosarcoma. The study team discovered a gene pattern that distinguished whether a tumor would be a more aggressive form of cancer or a less aggressive one. Studies like this could pave the way for laboratory tests to predict tumor behavior at diagnosis and tailor treatment plans accordingly for dogs and humans. Further research is ongoing about whether these canine gene patterns and other mutations may correlate with human disease.