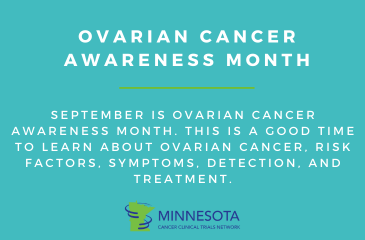 September is National Ovarian Cancer Awareness Month. This is a good time to learn about ovarian cancer and its risk factors, signs and symptoms, detection, and treatment. In 2021, about 21,410 women will be diagnosed with ovarian cancer, and 13,770 women will die from it in the United States. Ovarian cancer is the fifth leading cause of cancer-related deaths for women, and the most deadly of all gynecologic cancers. Mortality rates for ovarian cancer have decreased only slightly in the last forty years.

Ovarian cancer is a group of cancers that develop in the ovaries, or related areas such as the fallopian tubes or peritoneum, tissue that covers organs in the abdomen. Ovaries are found in the pelvis, with one on each side of the uterus. Ovaries make the hormones estrogen and progesterone, as well as producing and releasing eggs for reproduction. Eggs pass from the ovaries to the uterus through the fallopian tubes.

Cancer develops in ovaries or related areas when cells begin to grow uncontrollably and grow into tumors. There are three main types of tumors in ovarian cancer, named for the type of cells in the ovaries where cancer develops. Epithelial tumors start in cells that cover the outer surface of the ovary. Most ovarian cancer comes from epithelial tumors. Germ cell tumors come from the cells that produce eggs. Stromal cell tumors begin in structural tissue cells that hold the ovary together and produce hormones.

Ovarian cancer is often difficult to detect until it is advanced because there are few reliable screening methods. If caught early, patients with ovarian cancer live longer lives and have better outcomes. Therefore, it is important to learn about ovarian cancer symptoms and risk factors. Signs and symptoms of ovarian cancer include bloating, pelvic pain or pressure, vaginal bleeding, urinary urgency or pain, and feeling full quickly.

The discovery of BRCA1 and BRCA2 mutations is one of the most important breakthroughs in cancer research, genetics, and women’s health. Throughout history, ideas that traits and diseases might be passed on in families were common, but no one knew for sure how this occurred. In the 1860s, Gregor Mendel crossbred different pea plants and observed what characteristics, such as color and plant height, were carried on to the resulting offspring.

The field of genetics was born from this work, and scientists continued to study how genes worked in the 1900s. By the 1940s, scientists understood that genes were individual units that contributed to heritable traits. Researchers in the 1940s and 1950s discovered that genes are part of something larger, deoxyribonucleic acid (DNA). DNA is a complex molecule with a double helix structure that contains and codes genetic material. DNA is in every cell of the body and is passed down from parents to offspring. DNA contains genes, which tell cells how to make proteins.

With the discovery of DNA, scientists had a new way to study genetics and how diseases might be passed down in families. Still, researchers in the 1970s disagreed on whether cancer might be hereditary or caused by viruses. At this time, mathematician and scientist Dr. Mary-Claire King began studying familial history of ovarian and breast cancers. Dr. King hypothesized that since environmental and lifestyle factor similarities between family members who were diagnosed with ovarian or breast cancer hadn’t been found, genetics were at least partially responsible.

In the 1980s, Dr. King and her study team recruited 23 extended families consisting of 329 total relatives, 146 of which had breast cancer. Using blood samples from the family members, Dr. King examined 173 different genetic markers and computed the likelihood of coinheritance of breast cancer for each marker. Dr. King found a region on chromosome 17, naming the gene BRCA1. Researchers then went on to clone and sequence the specific gene in 1994. That same year, researchers Michael Stratton and Richard Wooster, found another gene on chromosome 13, and it was named BRCA2. Researchers determined that, like breast cancer, these mutations also were linked to greatly increased risk for ovarian cancer, over 40 percent.

After these discoveries, Dr. King continued to study BRCA1 and BRCA2 and described many mutations and how they contribute to breast and ovarian cancers. Researchers determined that these genes make proteins that are tumor suppressors and repair DNA damage to prevent tumors. However, when these genes mutate, the proteins don’t function effectively and no longer repair damaged DNA, potentially allowing cancerous cells to develop. Thousands of mutations on these genes have since been discovered.

From Dr. King and other scientists’ research, screening tests for BRCA1 and BRCA2 genetic mutations were developed. People with family histories of ovarian cancer, as well as breast cancer, can now get screened to know if they have a mutation. If they do, individuals can make informed decisions about their health and cancer risk, and take steps to help prevent future ovarian and breast cancer as a result. Prevention methods may include enhanced screening for cancer, risk-reducing surgery, and chemoprevention. If you have a family history and/or are interested in getting tested for BRCA1 and BRCA2 mutations, speak to your health care provider or a genetic counselor.

Research into BRCA1 and BRCA2 mutations is ongoing today. Researchers hope to learn more about how these mutations work, as well as the genetics of specific tumors so they can develop tailored treatments for specific mutations and tumors. Researchers are also working to decode and map the entire genome of ovarian cancer, as well as other cancers. Ovarian cancer screening methods and tests are another key area of research so cancer can be detected and treated early.