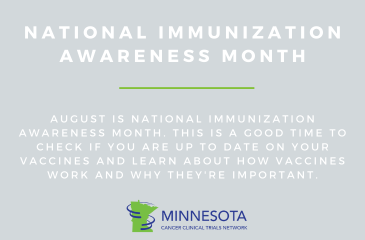 August is National Immunization Awareness Month. This is a great time to check your vaccination status to make sure you and your loved ones are up to date on necessary immunizations, especially children, and to learn about the importance of vaccines. This is especially important this year with the COVID-19 pandemic.

Vaccines are important to protect yourself and others from serious diseases and illnesses. Most vaccines are administered in childhood, but certain vaccinations are needed throughout the lifespan, such as booster shots for vaccines previously received in childhood or yearly flu shots.

Vaccines work by teaching the body to recognize potentially harmful pathogens so the immune system can respond and fight off infection in the future. Vaccines typically do so by injecting weakened, or even dead, parts of the germ or pathogen (such as a virus), called antigens. The antigens create a response in the body without causing illness.

Cancer researchers have worked to develop vaccines for certain types of cancer. The Hepatitis B vaccine prevents Hepatitis B infection, an illness that can lead to liver disease and cancer. Chronic, or long-term, infection with hepatitis B or hepatitis C leads to cirrhosis of the liver. Cirrhosis is a disease in which liver cells become damaged and are replaced by scar tissue. These damaged cells and scar tissues can often develop into liver cancer. Risk increases if people with hepatitis infection abuse alcohol (consuming at least 6 alcoholic drinks a day).

Hepatitis B and C spread through blood. This occurs through contaminated needles, unprotected sex, childbirth, and (less commonly) blood transfusions. Hepatitis B often causes symptoms such as flu-like illness and jaundice, so it may be more likely to be noticed and resolved before it becomes chronic. Hepatitis C, however, typically does not cause symptoms and is more likely to develop into a chronic infection.

Hepatitis has infected people for hundreds of years and its effects on the liver were recognized by its telltale jaundice symptoms (yellowing of the skin). In the 1940s, the first type of hepatitis, hepatitis A, was discovered. This type of hepatitis is transmitted through contaminated food or water. Hepatitis A does not lead to cirrhosis of the liver or liver cancer.

In the 1950s, medical anthropologist Dr. Baruch Blumberg began researching the genetics of disease susceptibility. Dr. Blumberg and his research team traveled the world to gather blood samples from people in remote areas. Dr. Blumberg decided to test these blood samples with antibodies from the blood of patients with a blood clotting disorder called hemophilia. Dr. Blumberg reasoned that the antibodies from the many blood transfusions that patients with hemophilia had would match with antigens in the blood samples he had collected from other people. With this new blood testing technique, in 1965 Dr. Blumberg discovered a match between an antibody in a hemophilia patient’s blood with an antigen in the blood sample from a person in Australia. He called this antigen the “Australia Antigen.” In 1967, the Australia Antigen was officially recognized as hepatitis B.

Blumberg and his team went on to develop a blood test to screen for hepatitis B. In 1971, blood banks began using these tests to screen people before donating blood, greatly reducing hepatitis B infections. In the 1970s, Blumberg and his colleague, Irving Millman, developed the first hepatitis B vaccine by harvesting the virus’ outer protein from the blood of chronic carriers and then heat treating it so the virus would be inactive.

The first hepatitis B vaccine was approved by the Food & Drug Administration (FDA) in 1981. This was the first vaccine to prevent a type of cancer in humans. In 1986, this type of vaccine was replaced with a new version that used genetically engineered hepatitis B instead of blood products, a safer method. This version has been the only hepatitis B vaccine used since 1990. Many countries launched vaccination programs to prevent hepatitis B from infancy, effectively reducing the incidence of liver cancer by as much as 80 percent in future generations.

Another vaccine that can prevent cancer is the HPV vaccine. The HPV vaccine prevents HPV and six different cancers, a huge milestone for cancer research that illustrates the importance of clinical trials. HPV is a group of more than 150 viruses. HPV can cause six different cancers by developing cell abnormalities, including oral cancers, reproductive cancers, and, most frequently, cervical cancer. HPV is responsible for about 90 percent of cervical cancer cases, with two strains, 16 and 18, responsible for 70 percent. It is estimated that HPV causes 36,000 cancer cases per year in men and women. HPV vaccination would prevent 32,000 of those cancer cases from ever developing.

The first HPV vaccine called Gardasil was approved by the Food & Drug Administration (FDA) in 2006. It protects against four types of HPV: 6, 11,16, and 18. A second vaccine, Gardasil 9, was approved by the FDA in 2014. This vaccine protects against four further HPV strains, including HPV 31, 33, 45, 52, and 58. Gardasil 9 is the only HPV vaccine available in the United States today.

The Gardasil vaccines work by using the protein shell of each HPV strain. This shell does not contain viral RNA or DNA, so it causes an antibody response in the body but does not cause disease. The antibodies bind to the HPV virus and prevent the virus from infecting cells. The vaccine is administered in a series of two or three shots.

Before the first Gardasil vaccine was approved, it was thoroughly researched and went through several clinical trials over the course of ten years. The vaccine was tested on more than 20,000 females in 33 countries, and 4,000 males in 18 countries. Clinical trials showed that the Gardasil vaccine is nearly 100 percent effective in preventing cell abnormalities in the cervix by HPV strains 16 and 18. The studies also showed the vaccine is 90% effective in preventing genital warts and lesions from forming as the result of HPV strains 6, 11, 16, and 18. Clinical trials on Gardasil 9 showed the vaccine is nearly 100 percent effective in preventing cell abnormalities by HPV strains 31, 33, 45, 52, and 58 as well. Further clinical trials have examined how effective Gardasil 9 is in different age groups. The studies have found that a greater immune response is created in younger adolescents. Therefore, it is recommended that boys and girls get vaccinated at age 11 to 12.

A potential area of research that has come about as a result of the COVID-19 pandemic is messenger RNA (mRNA) vaccines. These vaccines teach the body’s cells how to make a protein or piece of a protein that triggers an immune response inside the body and produces antibodies to fight off an illness. While these types of vaccines have been researched for decades, renewed interest has occurred because of the new and effective COVID-19 mRNA vaccines.

Multiple clinical trials have been launched to evaluate mRNA vaccines to treat or prevent certain cancers, such as colorectal cancer, head and neck cancer, melanoma, gastrointestinal cancers, ovarian cancer, breast cancer, pancreatic cancer, and more. Another recent study has begun to develop personalized vaccines to treat breast cancer and melanoma. These studies illustrate the importance of vaccines and how science and research continue to evolve and launch new ideas and therapies, all to improve health and increase knowledge.