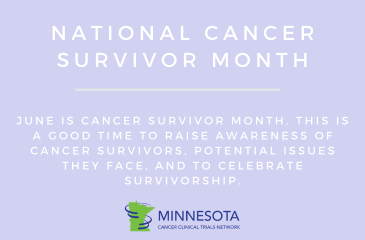 Due to significant advances in cancer treatment and better patient outcomes, the tangible result of research and clinical trials, more and more people diagnosed with cancer are surviving and living longer than before. According to the National Cancer Institute (NCI), a person is a cancer survivor from diagnosis until the end of their life. This includes both people living with cancer and those who are cancer-free and in remission.

Just a few decades ago, the outlook for individuals diagnosed with cancer was much more negative than it is today. In the 1970s, 1 out of 2 people diagnosed with cancer survived at least 5 years, compared with more than 2 out of 3 people surviving today. The greatest survival rate improvements have been seen in children, adolescents, and young adults.

As people with cancer live longer or even become cancer-free, more research is occurring to better understand specific issues that cancer survivors face and to improve cancer survivors’ quality of life. This has created the relatively new and growing field of cancer survivorship research.

The field of cancer survivorship began taking shape in the 1980s. In 1985, Dr. Fitzhugh Mullan used the term in a publication describing his journey with cancer, titled “Seasons of Survival.” The next year, the National Coalition for Cancer Survivorship (NCCS) was created. At the first NCCS meeting in October 1986, a new definition of “cancer survivor” was created. Prior to this, a cancer survivor referred to someone who had remained cancer-free for five years or more. The NCCS decided this definition was too strict and left out many people facing timely issues as a result of their cancer, such as fertility loss and making informed choices about treatment options. The NCCS proposed that people be referred to as cancer survivors from diagnosis onward.

As the field of cancer survivorship has grown over time, researchers are better understanding significant issues that cancer survivors face, especially in terms of quality of life and future health outcomes. Some of these issues include cancer recurrence, secondary cancers or other health conditions, long-term treatment side effects, mental health and well-being, economic burden, and more.

While cancer treatments have advanced greatly and can effectively cure or suppress a patient’s cancer, some treatments do not come without cost. Certain treatments can cause long-term side effects and increase a cancer survivor’s risk for future cancers or other health conditions. For example, some types of chemotherapy may cause heart damage. Researchers are working to better understand how this heart damage occurs, as well as finding out whether strategies such as other medications may prevent heart damage without affecting the function and effectiveness of chemotherapy.

Other cancer treatment strategies, such as immunotherapy, are so new that researches don’t know if any long-term effects may exist yet. As a result, the NCI is funding research to follow cancer survivors who have received immunotherapy over time to determine if any late effects exist.

The St. Jude LIFE study was launched in 2007 to learn more about the health of adults who were treated for cancer as children or adolescents. The study also aims to determine the prevalence of late effects, identify predictors of adverse health outcomes, develop risk profiles, and use data to guide screening and interventions. The study aims to follow childhood cancer survivors throughout their lifespan. To date, 4,300 participants have undergone health evaluations as part of the study, such as tracking cardiac, reproductive, neuromuscular, neurocognitive, and psychosocial function.