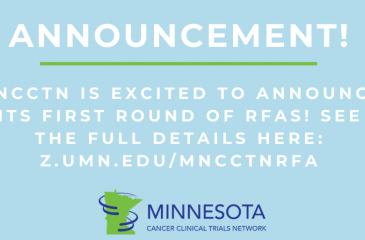 The Minnesota Cancer Clinical Trials Network (MNCCTN) announced its inaugural grant program for cancer clinical trials in January. This is a significant programmatic milestone for the network that has been years in the making. The grant program is intended to encourage the development of trials for the MNCCTN and broaden the depth and reach of clinical trials offered to cancer patients in Greater Minnesota.

Over the network’s first three years, MNCCTN has enrolled nearly 500 Minnesotans on clinical trials at 22 sites across the state. Several studies, developed with MNCCTN’s research partners, including the Masonic Cancer Center, University of Minnesota; Mayo Clinic Cancer Center; and the Hormel Institute, have been successfully implemented at MNCCTN sites throughout Greater Minnesota.

The progress of the network has surpassed expectations, but the MNCCTN’s leadership wanted to do more to create studies tailored specifically to Greater Minnesota and to engage new research partnerships. Many clinical trials are written for urban populations and may not reflect the needs, lifestyles, and cancer burden of rural communities. However, MNCCTN’s grant program allows researchers to develop trials specifically for Greater Minnesotans.

MNCCTN’s grant program offers three options for funding. The first two options are Community Site Awards, one of which is open to all MNCCTN partners, research or clinical.

However, the other Community Site Award option is open only to MNCCTN clinical partners in Greater Minnesota. This option funds a study developed directly at MNCCTN community sites by local clinicians or researchers, rather than an academic center like most other clinical trials. This ensures that the MNCCTN grant program not only expands access to those enrolling in clinical trials but also those conducting clinical trials. Members of the community also have a unique insight into the populations their health centers serve and what studies may best fit their needs. MNCCTN will support and assist community researchers with experience and expertise to bring their ideas to fruition.

The third grant option is a Diversity and Equity Award to address the cancer burden in underrepresented racial or ethnic minority populations in Minnesota. This award does not need to be implemented at MNCCTN sites or in rural communities.

“The MNCCTN grant program is such an exciting step forward and progression for the network,” Masonic Cancer Center Director Douglas Yee, MD, said. “These funding opportunities will not only create more MNCCTN trials but will help engage researchers in studies that may not have been developed before, create long lasting relationships, and expand rural Minnesotans’ and other underrepresented populations’ access to cancer clinical trials.”

For the initial funding cycle, up to three grants will be awarded, each with a maximum award amount of $125,000. Awardees will work in partnership with the MNCCTN HUB team on development and implementation of the study.

To learn more about MNCCTN’s grant program, visit z.umn.edu/MNCCTNRFA. All questions and inquiries should be directed to: mncctn@umn.edu

The Minnesota Cancer Clinical Trials Network (MNCCTN) is a cancer clinical trials network with locations across Minnesota, funded by the Minnesota legislature as part of the University of Minnesota's overall MnDRIVE Strategic Investment Request. Led by the Masonic Cancer Center, University of Minnesota, MNCCTN partner organizations aim to improve cancer outcomes for all Minnesotans through greater access to cancer clinical trials in prevention and treatment.