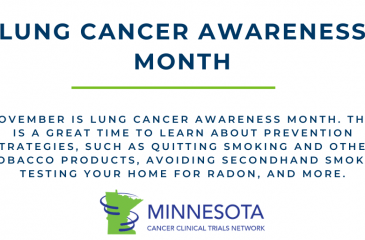 Prior to the 1900s, lung cancer was rare. It was at this time that cigarettes began to be mass produced and advertised to consumers around the world. The military also gave away free cigarettes to soldiers during World Wars I and II. Cigarette smoking soared, and so did lung cancer rates. By the 1950s, lung cancer was the most common cancer diagnosed in men in the United States.

Several studies were published in the 1950s examining a possible connection between smoking and lung cancer. The studies relied on participants with lung cancer self-reporting smoking habits compared to those who did not have lung cancer. These studies weren’t as reliable because people can under or overestimate their smoking habits. The connection between smoking and lung cancer began but was not strong enough, and the tobacco industry denied these claims and continued mass producing cigarettes.

Further studies were needed to follow people over time, track their smoking, and determine whether they developed lung cancer or not. In 1952, the American Cancer Society began a study doing just that. Researchers E. Cuyler Hammond, PhD, and Daniel Horn, PhD, launched a study following American men for nearly two years. The study followed 188,000 men between the ages of 50 to 69 from ten states.

The participants were given an initial questionnaire on their current and past smoking habits, including how often they smoked and how many cigarettes they smoked. Study volunteers then followed up with participants over 20 months. Initial findings were published in 1954. Men with a history of regular cigarette smoking were found to have a higher death rate than men who never smoked or men who only smoked cigars or pipes. These deaths were commonly caused by lung cancer or heart disease. The study determined that men who smoked had higher rates of lung cancer than those who did not. The researchers thought they had finally established a cause and effect relationship between cigarette smoking and lung cancer.

Hammond launched a second study with more than one million men and women, strengthening the link between smoking and lung cancer even more. Another study found that smoking 35 cigarettes per day made an individual 40 times more likely to die from lung cancer. These studies led to the 1964 Surgeon General’s Report on Smoking and Health, which analyzed several studies on smoking and determined that cigarette smoking is hazardous to one's health. This report led to tobacco policy changes like warning labels on cigarettes.

Studies regarding secondhand smoke effects have led to legislative changes throughout the 1980s-2000s. These include bans on smoking in restaurants, bars, airplanes, and other public spaces.

Studies on smoking have led to tangible changes, including legislation and regulation on tobacco. The number of people who smoke has also reduced significantly in recent years. In 2005, 20.9 percent of adults were current smokers. In 2018, this decreased to 13.7 percent. This reduction is a significant and great success, but there is more work to do to get more people to quit smoking and prevent diseases like lung cancer.

While the connection between cigarette smoking (including secondhand smoke) and lung cancer is clear, research studies on a variety of topics related to smoking are still ongoing. One important research area is nicotine reduction in cigarettes. Reducing the amount of nicotine in cigarettes may reduce dependence on cigarettes and make it easier for smokers to quit. Research is also continuing to determine the most effective strategies to help people quit smoking, as well as how to communicate the risks of smoking, especially to young people. E-cigarettes, or vaping, have become increasingly popular in recent years, and further research is needed to determine the health effects of these new tobacco products.

To learn ways and strategies to quit smoking, visit the CDC's webpage here.