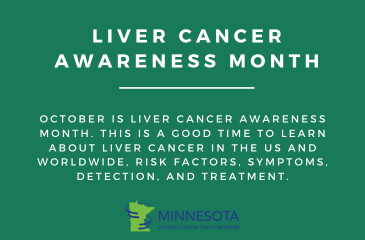 Liver cancer occurs when cells in the liver begin to grow uncontrollably. The liver is the largest internal organ in the body. It is mostly made up of cells called hepatocytes and bile ducts. Bile ducts carry bile from the liver to the gallbladder or intestines. Your body requires the liver to survive. The liver has many significant functions like breaking down and storing nutrients absorbed from the intestines, making clotting factors to keep the body from bleeding too much if injured, delivering bile to the intestines, and breaking down waste and toxins like drugs and alcohol in the blood so they can then be excreted through urine and stool.

Chronic, or long-term, infection with hepatitis B or hepatitis C leads to cirrhosis of the liver. Cirrhosis is a disease in which liver cells become damaged and are replaced by scar tissue. These damaged cells and scar tissues can often develop into liver cancer. Risk increases if people with hepatitis infection abuse alcohol (consuming at least 6 alcoholic drinks a day).

Hepatitis B and C spread through blood. This occurs through contaminated needles, unprotected sex, childbirth, and (less commonly) blood transfusions. Hepatitis B often causes symptoms such as flu-like illness and jaundice, so it may be more likely to be noticed and resolved before it becomes chronic. Hepatitis C, however, typically does not cause symptoms and is more likely to develop into a chronic infection.

Hepatitis has infected people for hundreds of years and its effects on the liver were recognized by its telltale jaundice symptoms (yellowing of the skin). In the 1940s, the first type of hepatitis, hepatitis A, was discovered. This type of hepatitis is transmitted through contaminated food or water. Hepatitis A does not lead to cirrhosis of the liver or liver cancer.

In the 1950s, medical anthropologist Dr. Baruch Blumberg began researching the genetics of disease susceptibility. Dr. Blumberg and his research team traveled the world to gather blood samples from people in remote areas. Dr. Blumberg decided to test these blood samples with antibodies from the blood of patients with a blood clotting disorder called hemophilia. Dr. Blumberg reasoned that the antibodies from the many blood transfusions that patients with hemophilia had would match with antigens in the blood samples he had collected from other people. With this new blood testing technique, in 1965 Dr. Blumberg discovered a match between an antibody in a hemophilia patient’s blood with an antigen in the blood sample from a person in Australia. He called this antigen the “Australia Antigen.” In 1967, the Australia Antigen was officially recognized as hepatitis B.

Blumberg and his team went on to develop a blood test to screen for hepatitis B. In 1971, blood banks began using these tests to screen people before donating blood, greatly reducing hepatitis B infections. In the 1970s, Blumberg and his colleague, Irving Millman, developed the first hepatitis B vaccine by harvesting the virus’ outer protein from the blood of chronic carriers and then heat treating it so the virus would be inactive.

The first hepatitis B vaccine was approved by the Food & Drug Administration (FDA) in 1981. This was the first vaccine to prevent a type of cancer in humans. In 1986, this type of vaccine was replaced with a new version that used genetically engineered hepatitis B instead of blood products, a safer method. This version has been the only hepatitis B vaccine used since 1990. Many countries launched vaccination programs to prevent hepatitis B from infancy, effectively reducing the incidence of liver cancer by as much as 80 percent in future generations.

While hepatitis B was identified and could now be screened for and prevented with vaccines, researchers were still puzzled by another blood-borne virus that was not detected by existing screening methods. Physician Harvey J. Alter studied this unknown virus in the 1970s and found that the virus could be transmitted from human blood to chimpanzees, causing hepatitis and liver pathological changes. In 1975, Alter referred to the virus as “non-A, non-B hepatitis.”

In the 1980s, researcher Michael Houghton and his team used blood samples from people with non-A, non-B hepatitis to isolate the genetic sequence of the virus. The team compared these DNA fragments with those of an infected chimpanzee until they found a clone, or match. Researchers found that this clone was a novel RNA virus and named it hepatitis C.

Researchers continued to study the DNA of the hepatitis C virus and understand its biology. They also developed highly sensitive blood tests to screen for hepatitis C, reducing the risk of blood transfusions, as well as creating effective treatments to cure the virus. However, no vaccine exists for hepatitis C like there is for hepatitis B and it typically does not cause symptoms, making hepatitis C especially dangerous.

This is especially concerning because, despite treatments and prevention strategies, liver cancer is increasing. In the United States, liver cancer rates have nearly tripled since the 1980s, and death rates have nearly doubled. Experts believe this is largely due to hepatitis C infection. Approximately 3.5 million people in the United States are living with chronic hepatitis C infection, 81 percent of which are baby boomers (people born between 1945-1965), many of whom were unknowingly infected before hepatitis C was identified.

In response to these alarming statistics, experts recommend a robust screening program for hepatitis C so cases can be diagnosed and treated as early as possible. Successful treatment, which usually takes just a few months, cures hepatitis C and can reduce liver cancer risk by 75 percent. Experts recommend that all people in the baby boomer age group be tested, as well as all those who want to be tested. Other risk factors that may increase one’s need for screening include: anyone who has ever injected drugs, recipients of blood transfusions or organ transplants before 1992, patients who have ever received long-term hemodialysis treatment, people with HIV, and children born to mothers with hepatitis C. Full screening recommendations can be found on the CDC website.