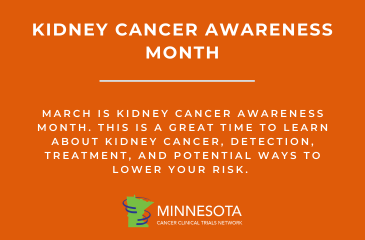 March is Kidney Cancer Awareness Month in the United States. This is a good time to learn more about kidney cancer and its risk factors, detection, and treatment.

Kidney cancer occurs when there is abnormal growth of cells in the kidneys. The most common type of kidney cancer is renal cell carcinoma, accounting for 90 percent of kidney cancer cases. Risk factors for developing kidney cancer include smoking, obesity, high blood pressure, and occupational exposures to certain dyes, solvents, and asbestos.

Kidney cancer is often only detected by chance during other imaging procedures. If detected early enough and the cancer hasn’t spread, kidney cancer can often be treated through surgery alone. Advanced kidney cancer is typically treated by immunotherapy and other targeted therapies.

In 1985, a study examined an immunotherapy treatment called Interleukin 2 (IL-2) on 149 patients with metastatic renal cell carcinoma. Metastatic means the cancer that began in the kidneys has spread to other parts of the body. IL-2 is one type of immunotherapy in a group called cytokines. Cytokines are small proteins that boost the immune system.

20 percent of patients responded to IL-2 and experienced long-term tumor shrinkage. The Food & Drug Administration (FDA) approved IL-2 to treat renal cell carcinoma in 1992, and it became the standard therapy. Another type of cytokine therapy called interferon was also developed during this time.

While IL-2 and interferon were successful in treating and even curing cancer in some individuals, the success rate was still low at 20 percent or lower and it caused serious side effects, so researchers hoped to find a more effective therapy. Researchers also developed different types of targeted therapies, including chemotherapy, to treat kidney cancer in combination with immunotherapy at this time.

The FDA approved nivolumab as a treatment for advanced renal cell carcinoma in 2015, under the brand name Opdivo. In 2018, studies also looked at combining Opdivo with another type of immunotherapy called Ipilimumab (brand name Yervoy). Yervoy is a CTL-4 (a specific type of protein on T cells) inhibitor. Opdivo and Yervoy are both checkpoint inhibitors and work in different but complementary ways.