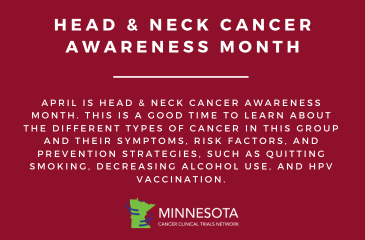 April is Head & Neck Cancer Awareness Month. This is a good time to learn about this group of cancers, as well as risk factors, prevention, symptoms, detection, and treatments. Head and neck cancers are a large group of many cancers that affect different areas of the head or neck. Some cancers affecting areas of the head or neck are NOT included in the group of head and neck cancers, such as cancers of the brain, eyes, esophagus, thyroid, and skin.

Head and neck cancer, like many other cancers, is typically treated with chemotherapy, drugs that kill and stop the growth of cancer cells, or radiation, a cancer therapy that uses high doses of radiation to kill cancer cells and shrink tumors. Some of the first studies that showed the effectiveness of chemotherapy or radiation on head and neck cancer were published in 1970. However, in many cases, cancer cannot be treated with one therapy alone. Instead of one cure-all, many cancer treatments consist of multiple forms of treatments over time. As a result, clinical trials are needed to not only test individual treatments but multiple treatments together.

In 1990, a study tested chemoradiation as a treatment on 124 participants with advanced squamous cell carcinoma of the head and neck. Tumors completely disappeared in 71 percent of patients. The therapy was especially effective in participants with cancer of the nasopharynx, with tumors disappearing in 89 percent of those patients. After one year, 68 percent of patients survived. Survival rates later decreased to 34 percent after four years. These results were superior to data from previous studies examining treatment with radiation alone.

More recent research has examined different types of chemotherapy and which drugs work best for head and neck cancer. Immunotherapy, using the body’s immune system to fight cancer, is another growing field of research that can benefit head and neck cancer patients. Recent studies have also examined the effectiveness of immunotherapy combined with chemotherapy to treat head and neck cancer. These studies, as well as studies throughout history on chemoradiation, illustrate the importance of research on multiple treatments; there often is not one single cure-all for cancer, and clinical trials are necessary to find out how different treatments can work together and create the best outcomes so patients can live longer and more comfortable lives.