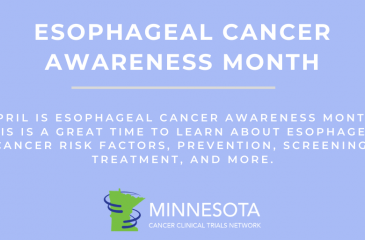 Esophageal cancer is a less common cancer, making up about one percent of cancers diagnosed in the United States. However, incidence of this cancer has increased markedly over the past 40 years and the survival rate is low. In 2021, it is estimated that more than 19,000 new cases of esophageal cancer will be diagnosed, and more than 15,000 people will die from esophageal cancer.

Men are more than three times more likely to be diagnosed with esophageal cancer than women. Survival rates for esophageal cancer have increased in recent years, with 20 percent of patients surviving five years after diagnosis.

The main risk factors for esophageal cancer are behaviors that irritate the esophagus. Some of these irritants include cigarettes, other tobacco products, and alcohol. Diet and obesity are other significant factors. Another risk factor is gastrointestinal reflux disease (GERD), also known as acid reflux. This chronic illness occurs when acid from the stomach escapes into the esophagus. Over time, stomach acids can damage cells in the esophagus, sometimes leading to a condition called Barrett’s esophagus. This is considered a precancerous condition, or a potential precursor to cancer, in this case esophageal adenocarcinoma.

Barrett’s esophagus occurs when damage to cells in the lower esophagus called squamous cells causes those cells to change and be replaced by a different type of cells called columnar epithelium. These cells resemble the lining of the intestines. These cells may divide, alter shape, or change further and are more likely to cause cancer. This is called dysplasia. The severity of dysplasia is referred to as either low-grade or high-grade. If cancer occurs, it typically follows a step approach from low-grade dysplasia to high-grade dysplasia to carcinoma.

Studies have found that about 10 percent of those with chronic GERD will develop Barrett’s esophagus. Less than one percent of people diagnosed with Barrett’s esophagus will develop esophageal adenocarcinoma. However, clinical trials have found that the risk increases greatly for people with low-grade dysplasia (10 percent), and even more for high-grade dysplasia (40 percent).

Clinical trials are examining what guidelines should be for screening and diagnosis of Barrett’s esophagus, as well as determining new strategies and procedures for diagnosis that may be less disruptive and uncomfortable. One such study is the Sponge-on-a-String study, open at several MNCCTN sites, which evaluates the effectiveness of a capsule sponge device in detecting Barrett’s esophagus. The device is swallowed by the patient, and then removed via the attached string, to collect and examine esophageal cells and measure biomarkers to diagnose Barrett’s esophagus.