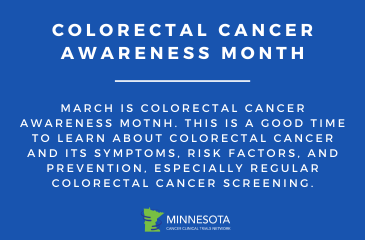 March is Colorectal Cancer Awareness Month. This is a good time to learn more about colorectal cancer and symptoms, screening, prevention strategies, and treatments. Colorectal cancer is one of the most common cancers, and it is the third leading cause of cancer-related death for both men and women in the United States. In Minnesota, colorectal cancer is the third most commonly diagnosed cancer, and it is the second leading cause of cancer-related death. In 2022, it’s estimated that there will be more than 106,000 new colon cancer cases and nearly 45,000 new rectal cancer cases in the United States.

Since the 1980s, colorectal cancer rates have declined overall in the United States, largely due to screening and prevention strategies. However, this is largely in people over the age of 50, who are most commonly affected by colorectal cancer. In people aged 20 to 49, colorectal cancer cases and mortality rates have increased. The reason for increases in younger populations is unknown.

Colorectal cancer starts in the colon or the rectum. These cancers are grouped together because they have much in common. The colon and the rectum make up the large intestine, which is part of the digestive system. Colorectal cancers often start as a growth, called a polyp, on the inner lining of the colon or rectum. Some polyps may develop into cancer, typically over many years. Other polyps will not turn into cancer. Polyps may grow and spread deeper into the other layers of the wall in the colon or rectum. They can also grow into blood vessels and lymph nodes and spread further in the body.

The best way to prevent polyps from developing into cancer and from spreading further is through colorectal cancer screening. The history of colorectal cancer screening goes back to at least the 1940s. One early screening method was the rigid sigmoidoscopy, which involved inserting a hollow tube instrument with a light into the rectum and colon. However, the procedure was difficult for the physician and could be painful and uncomfortable for the patient.

In 1948, a study at the University of Minnesota enrolled 21,500 people. The study found that rigid sigmoidoscopy resulted in 85 percent lower colorectal incidence compared to the general population. However, the study had many flaws, such as lack of control group and randomization, so results may not have been reliable. Another study in 1960 screened 26,000 people with rigid sigmoidoscopy, and detected 58 patients with colorectal cancer. These patients had a 90 percent survival rate in 15 years of follow-up after their cancers were detected.

Another early screening method was fecal occult blood tests. Polyps can cause blood vessels to be more delicate and more likely to be damaged when passing stool, potentially leading to bleeding. However, this does not typically cause enough bleeding to be visible to the eye; instead the blood is occult, or hidden. Therefore, testing for occult blood in stool can be a possible indicator of colorectal cancer or polyps.

In 1967, physician David Greegor found that of the 2,000 patients who came to his office for routine physicals, seven were diagnosed with colorectal cancer. All seven patients had occult blood in at least one of three stool samples. Greegor also refined existing screening methods by examining the accuracy of an at-home fecal blood test for patient and clinic convenience. If the test was positive, patients would then come in for a further testing procedure. Fecal occult tests are still used to screen for colorectal cancer today.

In the late 1960s, fiberoptic endoscopes were beginning to be developed. These were better-suited instruments for screening for colorectal cancer due to their flexibility and ease of use. Other devices were rigid and could only be inserted a small distance into the colon. New flexible endoscopes could be inserted the full length of the colon and navigate its twists and turns.

After learning about endoscopes, Drs. William Wolff and Hiromi Shinya thought the device could be adapted to screen for colorectal cancer and polyps. From 1969 to 1972, they developed and tested a colorectal cancer screening method, the colonoscopy. During this time, they also developed an endoscope, called a colonoscope, with a wire loop that allowed physicians to cauterize (or burn) and remove a polyp immediately while performing a colonoscopy. This eliminated the need for risky surgery to remove polyps.

Drs. Wolff and Shinya performed more than 1,600 colonoscopies in three years and removed 303 polyps from 218 patients. They published their findings in 1973, demonstrating that the colonoscopy was the most accurate and effective colorectal cancer screening method compared to other existing methods. Colonoscopies soon became a routine screening method and recommendation from physicians. As a result, colorectal cancer incidence and mortality have decreased significantly since the 1970s.

The colonoscopy remains the most common and effective colorectal cancer screening method today. Certain aspects of the procedure and technologies have changed, such as incorporating a video endoscope in the 1980, as well as testing different amounts of time to perform the procedure and determine the most accurate results. Today, the procedure involves bowel prep to empty the colon prior to the colonoscopy. This can be done through liquids, pills, and/or enemas. Before the procedure, a patient receives a sedative. Then, the colonoscope, a long, thin tube with a light and camera, is inserted into the rectum and passed up the colon. The physician will look carefully at the walls of the rectum and colon. If any polyps or other issues are seen, the entire polyp or a small piece, depending on the polyp size, will be removed through the colonoscope to biopsy and test for cancer at a lab.

While colonoscopies are considered one of the most accurate and effective colorectal screening methods, other methods have been developed and are used today. Stool DNA tests look for abnormal DNA sections from cancer and polyps, as well as occult blood, in stool. These tests can be done at home. CT colonography, also known as virtual colonoscopy, is a visual screening method. It uses computed tomography (CT) scans and X-rays to look inside the body and make 3-D images of the colon and rectum. This procedure doesn’t involve sedation or inserting instruments into the body and may be a good option for people who don’t want to undergo the more invasive colonoscopy procedure. However, colonoscopies are still considered more accurate, and CT colonography is recommended at more frequent intervals than colonoscopies (every five years versus every ten years). Additionally, if any polyps or other issues are found in a CT colonography, the patient will have to undergo a traditional colonoscopy to investigate further.

Current screening guidelines in the United States recommend that people of average risk for colorectal cancer begin regular screening at age 45 and continue through age 75. This can be either a stool-based test or a visual test, such as a colonoscopy. The frequency depends on the type of screening method. For people aged 76-85, screening depends on the individual and physician’s recommendations. People over age 85 should not be screened for colorectal cancer. If a person is of higher than average risk due to factors, such as having a personal or family history of colorectal cancer, polyps, or inflammatory bowel disease, more frequent screening may be recommended. To determine your screening schedule and ensure you are up to date on screening, speak to your doctor.