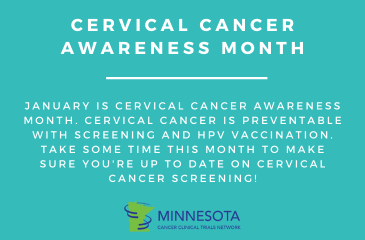 January is Cervical Cancer Awareness Month in the United States. Cervical cancer is cancer of the cells lining the cervix, the lower part of the uterus. The cervix connects the body of the uterus with the vagina. Cancer begins in the cervix when cells begin to grow out of control. The most common cause of cervical cancer is human papillomavirus (HPV) infection. HPV causes about 90 percent of cervical cancers, and it is preventable through HPV vaccination.

The Pap test is a procedure that collects cells from both the exocervix and endocervix. The cells are placed on a glass slide or in a bottle with liquid to preserve the cells. The cells are then sent to a lab to be examined under a microscope to check for precancerous changes and cervical cancer. The Pap test was the first-ever cancer screening test to be developed and widely used.

In the early 1900s, cervical cancer was one the leading causes of death in women in the United States, with more than 40,000 deaths each year. In 1916, Greek scientist Georgios Papanicolaou, considered the father of cytology (the study and examination of single cell types to diagnose disease), was studying the sex chromosomes and physiology of guinea pigs at New York University’s Pathology Department and Cornell University Medical College’s Anatomy Department. Papanicolaou described cytological patterns and physiological changes in vaginal samples from guinea pigs, and he thought his findings may be relevant to human physiology and the human reproductive system as well.

In the 1920s, Papanicolaou studied samples from human volunteers and discovered normal and malignant cell differences when cells swabbed from the cervix were examined under a microscope. Papanicolaou presented his findings in 1928, but other scientists rejected his research, largely based on errors and misspellings because Papanicolaou was still learning English after immigrating to the United States, as well as the commonly held belief that cells could not be used to diagnose cervical cancer.

The Pap test was further perfected by Dr. J Ernest Ayre, a Canadian gynecologist. With Papanicolaou’s initial test, cells from the vagina and cervix were collected with a glass pipette, which only allowed a small number of cells to be obtained. Ayre altered the test and used a scraping method with a spatula, allowing more cells to be easily collected. The Ayre Spatula was patented in 1949.

Cervical cancer screening clinical trials and programs were slowly launched through the 1950s and 1960s until they became a regular part of women’s annual health care. In the 1990s, new liquid-based cytology methods were used to develop an additional Pap test method in which cells are suspended in a liquid and preserved for testing instead of being smeared on a slide. This method may be more reliable and efficient, and both methods have similar efficacy in detecting cervical cancer.

Researchers are still examining the effectiveness of HPV tests and other screening methods, as well as screening guidelines for individuals based on risk factors. For Cervical Cancer Awareness Month, remember to speak to your doctor to find out what is best for you and your health and to check if you are up to date on cervical cancer screening.