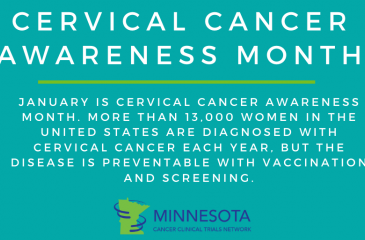 January is Cervical Cancer Awareness Month. Every year, more than 13,000 women are diagnosed with cervical cancer in the United States. However, cervical cancer is preventable with vaccinations and regular screening.

Human papillomavirus (HPV) is a group of more than 150 viruses. HPV can cause six different cancers, one of which is cervical cancer. HPV is responsible for about 90 percent of cervical cancer cases, with two strains, 16 and 18, responsible for 70 percent. HPV causes cell abnormalities in the cervix, which can lead to cancer.

In response to these alarming statistics, scientists worked to develop a vaccine for certain strains of HPV. The HPV vaccine is a significant milestone for cancer research, and illustrates the importance of clinical trials.

The Gardasil vaccines work by using the protein shell of each HPV strain. This shell does not contain viral RNA or DNA, so it causes an antibody response in the body but does not cause disease. The antibodies bind to the HPV virus and prevent the virus from infecting cells. The vaccine is administered in a series of two or three shots.

Before the first Gardasil vaccine was approved, it was thoroughly researched and went through several clinical trials over the course of ten years. The vaccine was tested on more than 20,000 females in 33 countries, and 4,000 males in 18 countries.

Clinical trials on Gardasil 9 showed the vaccine is nearly 100 percent effective in preventing cell abnormalities by HPV strains 31, 33, 45, 52, and 58 as well.

Further clinical trials have examined how effective Gardasil 9 is in different age groups. The studies have found that a greater immune response is created in younger adolescents. Therefore, it is recommended that boys and girls get vaccinated at age 11 to 12.

While the HPV vaccines already show great progress, the research is not done! Clinical trials in Costa Rica and Australia are currently studying whether the vaccine could be effective in a single dose. Other studies are examining the efficacy of the vaccines over an extended period to determine the total duration of HPV protection from vaccines.

Another study is examining a new potential form of prevention: carrageenan. This compound extracted from seaweed has been found to inhibit HPV in lab studies. Preliminary data suggests that use of a lubricant gel containing carrageenan reduces the risk of HPV infection in healthy women.

Finally, ongoing clinical trials are working to develop and test the efficacy and safety of a therapeutic HPV vaccine. Instead of preventing HPV infection, this vaccine would prevent cancer in women previously infected with HPV. This type of vaccine stimulates the body’s immune system to target and kill infected cells.