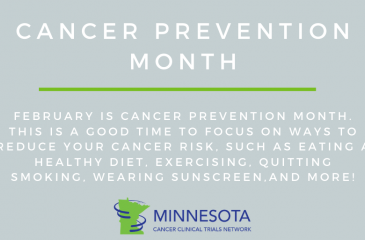 February is National Cancer Prevention Month. This is a great time to examine what you can do in your life to prevent certain cancers and practice healthy habits. Some of these habits include using sunscreen, quitting smoking and other tobacco products, exercising, and getting vaccinations.

One important cancer prevention strategy is adopting a healthy, well-balanced diet and focusing on nutrition. It is estimated that dietary factors account for about 30 percent of cancers in Western countries, making diet the second largest factor in cancer risk after tobacco.

Food and nutrition are significant factors in disease because what a person eats is broken down and used by cells in the body. Certain foods may contain components that affect cells. Researchers examine foods and the chemicals they contain to see if these components may fuel the growth of cancer cells or prevent it.

Obesity is another factor linked to food intake. Obesity can cause long-term inflammation in the body, which may increase cancer risk. Excess weight can also cause hormones to rise, which can increase the risk of certain cancers, such as breast cancer.

This prevention strategy may bring up questions. What is a healthy diet? What foods should I focus on? If you’re asking yourself those questions, you are not alone! Cancer researchers have also been asking these questions for decades.

In the 1960s to 1970s, epidemiological studies examined diet differences in different countries and cultures. Some studies observed that developed Western countries, such as the United States, had diets with higher amounts of fat, sugar, and animal products. These countries also had higher rates of certain cancers, such as colorectal, breast, and prostate cancer.

Conversely, developing countries had diets higher in starchy foods and lower in fat, sugars, and animal products. Developing countries exhibited lower rates of the more common Western cancers but higher rates of other cancers. These studies suggested there could be a link between diet and cancer.

Once a link was determined between certain food groups and cancer risk, many researchers chose to focus clinical trials on specific vitamins and their impact on cancer risk. This approach examines whether a single component can initiate a biological effect to prevent the formation and growth of cancer cells.

One such example of this approach was the Alpha-Tocopherol, Beta-Carotene Cancer Prevention Study in the 1980s. Researchers believed that diets high in certain vitamins could prevent cancer. The study included more than 29,000 male smokers aged 50 to 69. Participants took pills containing either alpha-tocopherol, beta-carotene, or a placebo daily over five to eight years. Participants were followed for 20 years after the study concluded to determine lung cancer incidence and mortality.

Unfortunately, taking these vitamins in pills did not reduce lung cancer incidence in participants and may have actually increased cancer risk. Studies like this one led researchers to question whether taking large amounts of vitamins as pills rather than from whole foods may have unintended negative effects. These studies and others focusing on single vitamins or foods were also difficult to conduct because of other factors beyond researchers’ control, such as the rest of a person’s diet and other lifestyle factors and habits.

Studies such as this have led some researchers to move away from reductionist studies focusing on only one vitamin or food and instead focus on the total diet. The National Cancer Institute (NCI) produces a tool every five years called the Healthy Eating Index to assess eating patterns and diet. Researchers use this tool to evaluate qualities of food and how closely diets align with the recommendations.

The United States’ Dietary Guidelines have also shifted toward total diet. The most recent guidelines stress a healthy diet across the lifespan, eating a variety of nutrient dense foods. limiting calories from added sugar and saturated fats, and reducing sodium intake.

While there is conflicting evidence and randomized trials are difficult to conduct, nutrition is still an important factor in cancer risk. Overall, experts recommend a diet rich in whole fruits and vegetables, whole grains, and lean proteins. They also recommend limiting excess calories, added sugars, saturated fats, sodium, and alcohol. Further research is needed on particular foods that may cause cancer, like processed meats, as well as particular foods that may be protective against cancer, such as cruciferous vegetables, and dietary patterns like plant-based diets.