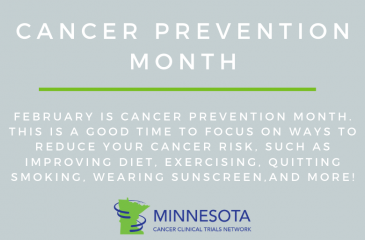 February is National Cancer Prevention Month. This is a great time to focus on habits to lower your risk and prevent cancer, not just for the month but for the years ahead. These habits include improving diet, exercising, quitting smoking, wearing sunscreen, getting screened, and more.

While clinical trials are perhaps best known for studying treatments, there are many prevention clinical trials as well. Prevention studies seek to find ways to prevent medical conditions or diseases, such as cancer, from occurring or reocurring. These ways could be medicines, vitamins, certain foods, lifestyle changes, and more.

The link between aspirin and colorectal cancer prevention began in the 1980s with observational studies. One study, published in 1991, consisted of 662,424 men and women in the United States. These individuals reported their aspirin use, and death rates were tracked over six years. The study found that taking aspirin at least 16 times per month was associated with a 40% reduced risk of colon cancer mortality. An updated analysis of this study found that daily use of at least 325 mg of aspirin for at least 5 years was associated with a lower incidence of colorectal cancer compared with those who did not take aspirin.

Due to the vast research on colorectal cancer and aspirin, the U.S. Preventive Services Task Force recommends low-dose aspirin use in adults aged 50 to 59. These individuals should not be at an increased risk of bleeding. They should have a life expectancy of at least ten years and are willing to take aspirin for at least ten years.

While the most significant step you can take to prevent colorectal cancer is to get screened, aspirin is a great tool to reduce your risk as well. This is especially important and helpful for people and communities that may not have access to regular screening or those who have an increased risk of developing colorectal cancer.