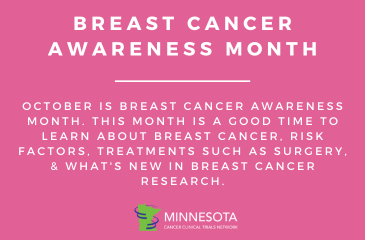 There are different types of breast cancer, and the type depends on the part of the breast where the cancer begins. Lobules are glands in the breast that make milk. Lobular cancer begins in lobules. Ducts are small canals that come out of lobules and carry milk to the nipple. Ductal cancers begin in the ducts. Less common breast cancers can begin the nipple, fat and connective tissue, and blood or lymph vessels in the breast. Breast cancers can spread if cells reach the blood or lymph systems where they can then spread to other parts of the body.

While it isn’t known exactly what causes breast cancer, there are certain risk factors. Family history of breast cancer and specific genes or gene changes, or mutations, are risk factors for breast cancer. Gene mutations can be passed down, or they can occur on their own. BRCA genes are tumor suppressor genes. These genes control how often cells divide. For those with inherited or acquired BRCA gene mutations, this suppressing ability can be changed or turned off. The gene no longer controls cell growth and division, and cancer is more likely to develop as a result.

Other breast cancer risk factors include age, alcohol use, physical activity, race/ethnicity, birth control use, not having children, and not breastfeeding. While many cases of breast cancer cannot be prevented, there are some lifestyle strategies to lower your risk. Some ways to lower your risk include maintaining a healthy weight, being physically active, and limiting alcohol use. For those with a family history and/or inherited gene changes, some prevention strategies include genetic testing and counseling, certain medications, preventive surgery, and close observation. Regular breast cancer screening is also important to be able to catch abnormalities or cases early.

Breast cancer surgery is often referred to as a mastectomy, which means removal of a breast. There are different types of mastectomies, and the type depends on how much of the breast is removed. While there isn’t reliable data, it is likely that people have performed this kind of surgery for hundreds of years. However, the first documentation of the procedure and formal guidelines for performing a mastectomy occurred in the late 1800s.

In 1882, American surgeon William Halsted began documenting a surgical procedure to remove the breast and surrounding tissues, called a radical mastectomy. He published the results and detailed information on how to perform the procedure in 1894. The procedure involved removal of all breast tissue, surrounding lymph nodes, and chest muscles. It soon became the standard treatment for breast cancer. The radical mastectomy was effective at treating breast cancer, increasing survival, and reducing or preventing recurrences. Only about 7 percent of patients had a breast cancer recurrence in Halsted’s study. This method was typically used for all types of breast cancer regardless of tumor type, location, or size. While effective, the procedure was difficult on the body, and often resulted in disfigurement and affected use of the arms. It could even lead to lasting disabilities. These effects greatly diminished quality of life for patients.

Despite lasting effects, Halsted’s procedure was still used for decades with little change to the approach. In fact, the procedure was performed on 90 percent of breast cancer patients until the 1970s. There are a few potential factors for why this procedure continued to be performed on women for so many years. One factor is the success rate. Doctors may not have wanted to risk patients’ lives by trying new treatments when an existing technique was very effective and saved lives. Another factor may have been that doctors did not understand the effects, both physical and emotional, that women experienced with the loss of their breasts. This may have been compounded by the place of women in society compared to men at this time in history.

Another important aspect of quality life related to surgery is breast reconstruction. This type of procedure attempts to replicate the appearance, shape, and size of the breast(s) after a mastectomy or other surgery. One reconstruction method uses synthetic breast implants. This typically involves two surgeries. The first surgery inserts a tissue expander. This expander is like a water balloon. It is filled gradually to the desired size. The second surgery replaces the expander with a breast implant. Further procedures may be used to improve the look or alter the areola and/or nipple.

Another reconstruction method is a flap procedure, which uses tissue from other parts of the body versus an implant. These may look or feel more natural than implants. However, because it is real tissue, the reconstructed breasts may change more over time. This method typically uses multiple surgeries to remove the tissue and attach it to the chest and shape it properly. While these procedures may be involved and have more recovery time, many women experience better quality of life, mentally and physically, after a reconstruction.