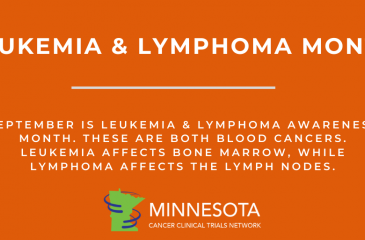 Leukemia occurs when the bone marrow produces too many abnormal white blood cells. Over time, the abnormal cells outnumber and suppress the development of normal cells, leaving less room for red blood cells to carry oxygen throughout the body.

Lymphoma begins in the immune system and affects the lymph nodes and white blood cells called lymphocytes. Abnormal cells grow quickly and develop into tumors or growth in the lymph nodes.

Both leukemia and lymphoma can be treated in certain cases with bone marrow transplants. Bone marrow is the fatty, spongy tissue in the bones. It creates red blood cells, white blood cells, and platelets.

A bone marrow transplant replaces bone marrow that has been damaged or destroyed by disease, such as leukemia or lymphoma. Healthy blood stem cells, from one’s own body or from a donor, are transplanted so they will produce new blood cells and grow new healthy marrow.

The history of transplantation goes back to ancient times. The idea of removing unhealthy organs and replacing them with healthy ones was written extensively in history. However, bone marrow transplants didn’t become a common idea until the 1940s. During and after World War II, people needed skin grafts, blood transfusions, and more. Researchers studied why these procedures often led to the person’s body rejecting donor skin or blood. Researchers also discovered that exposure to radiation, which many people experienced during the war, led to bone marrow failure or death.

Researchers determined the body rejecting organs or blood from another person was due to the immune system. In the 1950s, researchers experimented with bone marrow grafts in animals exposed to radiation. These studies led to experimentation with people. However, these procedures were unsuccessful due to the body rejecting donor marrow. It was not known at this time that the bone marrow donor needed to be a genetic match.

In 1956, the first successful bone marrow transplant was performed by Dr. E. Donnall Thomas in Cooperstown, New York. A child with leukemia received a transplant with bone marrow from their identical twin. Two years later, French immunologist Dr. Jean Dausset discovered human leukocyte antigens (HLA). This group of proteins regulates the immune system and recognizes what belongs in the body and what does not. HLA compatibility between recipient and donor is vital for a successful transplant.

In 1968, the first bone marrow transplant with a matched related donor occurred at the University of Minnesota. Dr. Robert Good completed the procedure on David Camp, a baby with a severe immune deficiency, using marrow donated by David’s nine-year-old sister, who was an HLA match. The match was determined by a blood test developed by Dr. Fritz Bach at the University of Wisconsin-Madison.

Further work and research need to be done to close these gaps and make sure all people have the same access to the matches necessary for this live-saving procedure. Researchers are also developing ways to make bone marrow transplants safer, reduce complications, and potentially treat other diseases.