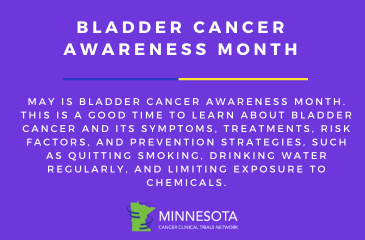 May is Bladder Cancer Awareness Month. This is a good time to learn about bladder cancer, risk factors, prevention, and treatment. Bladder cancer is the fourth most common cancer for men, but is less common for women. It is estimated that about 81,000 new cases of bladder cancer will be diagnosed in the United States in 2022, and about 17,000 people will die from bladder cancer.

Bladder cancer cases have decreased slightly in recent years, but mortality rates in men have stayed about the same. Most people diagnosed with bladder cancer are older, and 9 out of 10 cases are in people aged 55 years or older.

The bladder is a hollow organ in the lower pelvis. Its main job is to store urine. The bladder has flexible walls and a lining made up of cells called urothelial cells. Bladder cancer begins when cells in the urinary bladder start to grow out of control. As more cancerous cells grow, a tumor can develop, and cancer can also spread to other parts of the body.

Researchers don’t know exactly what causes bladder cancer, but some risk factors for developing bladder cancer have been identified. Smoking is one of the biggest risk factors. In fact, people who smoke are about three times more likely to develop bladder cancer than non-smokers. Other risk factors include workplace exposure to industrial chemicals, use of certain medications, arsenic in drinking water, not drinking enough fluids, bladder birth defects, family history, and genetic mutations. Because some risk factors are related to lifestyle factors, there are some ways to prevent or lower your risk for getting bladder cancer. Some potential prevention strategies include quitting smoking, limiting exposure to chemicals, drinking fluids and staying hydrated, and eating a diet rich in fruits and vegetables.

Bladder cancer treatments depend on the type and stage of the cancer. The most common treatment is surgery, with or without other treatments, such as chemotherapy and radiation. When bladder cancer is more advanced and invasive, the most common surgery is a cystectomy. In this procedure, part or all of the bladder is removed. A cystectomy is often accompanied by chemotherapy before or after surgery.

The cystectomy procedure for bladder cancer treatment was first developed in the 1940s and 1950s by clinicians at the New York Hospital- Cornell Medical Center and Memorial Center for Cancer and Allied Diseases. The surgeons observed that current surgical procedures, which typically removed tumors more locally, often missed cancerous areas or didn’t remove the cancer in full, leading to poor outcomes for patients. They believed that a more extensive bladder removal, which followed the pelvic walls instead of the local tumor and also removed adjacent lymph nodes, would ensure that as much of the cancer would be removed as possible and stop cancer from spreading, leading to better outcomes and survival for patients.

From 1948 to 1956, the surgeons led a clinical trial on this new technique and performed more than 200 surgeries. They called the procedure “radical total cystectomy,” and published an in-depth step-by-step article on the procedure. The article also included considerations for risk, especially blood loss and month-long hospitalizations, and long-term side effects. This initial study laid the groundwork for the cystectomy and allowed other surgeons to learn and further refine the procedure so it was safer and more effective.

The cystectomy was further developed over the next three decades. In the 1970s and 1980s, chemotherapy was introduced to accompany the cystectomy and improve bladder cancer survival rates. As the cystectomy procedure became more common, a new scientific question arose about reconstructing the bladder for those patients whose bladders were partially or fully removed to improve functions and quality of life. Bladder cancer patients who underwent cystectomies required an external device to collect urine, or a catheter. Reconstructive surgeries sought to reconstruct the bladder in a way that allowed patients to collect, store, and pass urine more effectively, with or without devices.

Trials of reconstructive surgery techniques first began in the 1950s with a trial on 17 patients. Researchers developed a technique that involved using tissue from the intestine to create a functional replacement for the bladder (called a neobladder). The neobladder is connected to the ureters and urethra, allowing urine to pass from the ureters, to the neobladder, and out the urethra. This procedure was further refined in the 1980s with multiple clinical trials to make the process more effective, as well as assess and resolve incontinence and other complications.

Another reconstructive method is incontinent diversion, which uses a piece of the intestine to connect the ureters.This allows urine to pass through an opening in the stomach, called a stoma, into a bag outside the body to collect and store urine. The last method is continent diversion. This uses a pouch made from the intestine, which is attached to the ureters and collects urine internally and has a valve to keep the urine from flowing out of the pouch. The pouch is then emptied regularly using a tube inserted into an opening (stoma) in the stomach.

In the 1980s, researchers further refined the cystectomy to improve the quality of life for male bladder cancer patients. One common complication related to the cystectomy was loss of sexual function in nearly all men who underwent the procedure. This frequently occurred due to injury to nerves in the pelvic area. Researchers were able to map out the nerves surrounding the bladder and prostate and alter the cystectomy procedure accordingly to avoid damage to those nerves. They then conducted a clinical trial on 25 participants who underwent the new cystectomy procedure for bladder cancer and followed the participants for five years. The researchers found that 83 percent of participants did not lose sexual function, compared to nearly 100 percent of men who typically lost sexual function after the standard procedure. The patients did not have bladder cancer recurrence in the five-year timeframe as well.

Today, bladder cancer surgery has been further developed to help bladder cancer patients live longer, healthier, and more comfortable lives. One potential area of exploration today is robotic surgery. With this type of procedure, a surgeon operates and performs the surgery with robotic arms. This can be more precise, resulting in smaller incisions, less pain, and shorter recovery time. However, more research needs to be done to determine if this type of procedure is as effective. Researchers continue to examine the best treatment methods, plans, and timing for surgery, chemotherapy, immunotherapy, and targeted therapies for optimal survival and with fewer complications.