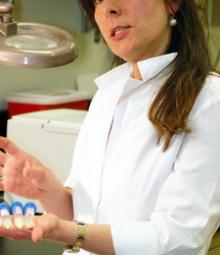 Dr. Bazzaro served as guest researcher at the “Institut de Biochemie” in Lausanne, Switzerland and at the Karolinska Institute in Stockholm, Sweden.

She competed her postdoctoral training at the Department of Pathology of the Johns Hopkins Hospital.

Fellowship in the Department of Pathology, Johns Hopkins University School of Medicine, 2009

Dr. Bazzaro’s laboratory is interested in studying abnormalities of protein degradation pathways in breast and ovarian cancer. The Ubiquitin-Proteasome-System (UPS) is responsible for degradation of over 90% of short-lived intracellular proteins. Protein degradation through Ubiquitin-Proteasome-System is a multistep process that begins with de-ubiquitination of ubiquitin-tagged target molecules by de-ubiquitinating enzymes following their entrance in the 20S catalytic chamber of the proteasomes were the actual degradation occurs. The polypeptide targets of the proteasome include proteins involved in cell cycle progression, survival and inflammation and while the ubiquitin-dependent proteasomal degradation is crucial for both normal and malignant cells the higher demand for metabolic/catabolic activity associated with the malignant phenotype renders the ubiquitin-proteasome pathway a suitable tool for cancer treatment. The laboratory is particularly interested in studying the role played by proteasomal- and lysosomal-assisted protein degradation pathways during the development and the progression of breast and ovarian cancer and in the development of new small-molecules inhibitors of ubiquitin-proteasome-system for targeting breast and ovarian cancer cells.