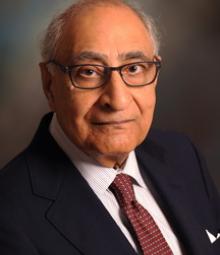 Dr. Ahmed is a Senior Research Career Scientist at Minneapolis VA Health Medical Center. He has a long history of studies on functional biology of protein kinase CK2 (formerly casein kinase II or 2) and is considered a leader in this field. CK2 has emerged as a major signal involved in diverse cellular functions of health and disease and may be a universal target for cancer drug development.

Ahmed began his investigation of CK2 in studies of prostate cancer and has subsequently studied CK2 involvement in head and neck cancer, breast cancer, and melanoma.He was first to characterize CK2’s intracellular phosphorylation signaling mechanism and then delineated the role of CK2 as a suppressor of cell death, including apoptosis or programmed cell death, in normal and neoplastic cells. The latter activity of CK2 is now regarded as one of its most important functions.

Ahmed’s current research, in collaboration with fellow investigators at the VA Health Care System and private industry, focuses on studies of the mechanisms of CK2 regulation of cell death and on developing molecular therapeutic strategies using a nanomedicine approach for the treatment of prostate and other cancers.

CK2 signal plays a critical role in cell growth and proliferation. Studies by Ahmed and his colleagues show that CK2 is highly expressed in proliferating cells including cancer cells, and loss of CK2 activity results in cell death. All cancers they have analyzed demonstrate consistently up-regulated CK2, which is distinct from the pattern of up- and down-regulation found in normal cells, a kind of regulatory homeostasis. The ability of CK2 to promote cell growth as well as suppress apoptosis links the kinase to cancer biology as cancer cells are characterized by dysregulation not only of proliferation but also of apoptosis, which means that this signal has the potential of serving as a target for inducing apoptosis in cancer cells. Ahmed originally proposed CK2 as a target for cancer therapy, which is now being pursued by several groups.Although CK2 is present in both the nucleus and cytoplasm, in cancer cells it tends to concentrate in the nucleus.Ahmed’s laboratory has found that many of the CK2 functions related to cell growth and cell death are mediated via its signaling to structures in the cell’s nucleus such as chromatin and nuclear matrix. Ahmed and co-investigators Janeen Trembley, Betsy Kren and others are delineating the mechanism of these signaling events. Recently they found that the CK2 activity affects the membrane potential of mitochondria, which is associated with rapid intracellular calcium flux; mitochondria are the classical mediators of cell death.

Ahmed and his colleagues have also established proof of principle for the potential targeting of CK2 for cancer therapy by antisense or siRNA-mediated molecular downregulation of CK2.In collaboration with Gretchen Unger of GeneSegues, Inc., they are employing a novel nanoparticle approach for delivering CK2 antisense or siRNA oligonucleotides specifically to the tumor cells in vivo. They have developed an entirely original nanocapsule strategy to deliver the treatment to cancer cells, thereby avoiding normal cell damage and heightened toxicity characteristic of conventional chemotherapy. Unger invented a neutrally charged protein nanocapsule particle less than 50 nanometers in size that carries an anti-CK2 nucleic acid to induce cell death by prohibiting the formation of CK2, an essential protein for cell survival.The researchers created this nanocapsule using the tenfibgen protein subdomain of the extracellular matrix molecule tenascin C, which is readily recognized by the surface receptors for tenascin in cancer cells, allowing the nanocapsule to enter the cell. Upon entry the cell breaks down the capsule’s shell releasing the anti-CK2 nucleic acid.Cancer cells begin to die when CK2 expression is reduced, typically at as little as 30 percent of CK2 protein loss.

Ahmed is encouraged by results from small- and large-animal studies of the potential for a nanomedicine strategy for treating cancer by selectively inhibiting CK2 expression in cancer cells.He is particularly interested in its potential for treating metastatic bone cancer arising from prostate cancer.This type of bone cancer is currently untreatable.