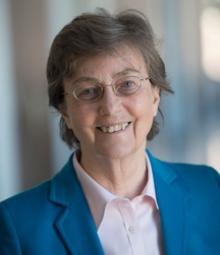 Professor Georg and her group have published over 250 scientific articles and are involved in the design, semisynthesis, total synthesis, and evaluation of biologically active agents. Current therapeutic areas include cancer, male and female non-hormonal contraception, cancer, and epilepsy.

Professor Georg is the PI of a NICHD P50 “Contraceptive Discovery, Development and Behavioral Research Center” that involves six institutions. She is the co-inventor of LusedraTM, which was marketed by Eisa Pharmaceuticals, of Minnelide, an anticancer agent in phase II clinical trials, and of Gamendazole, a male contraceptive agent in preclinical development.

Professor Georg is the co-Editor-in-Chief of the Journal of Medicinal Chemistry of the American Chemical Society.

She has served as a member of review panels for the National Institutes of Health, the National Science Foundation, the American Cancer Society and others.

and the American Chemical Society.

In 2013 she received the Ernest H. Volwiler Research Achievement Award of the American Association of Colleges of Pharmacy, was named a Fellow of the American Chemical Society, and was the International Chair of Therapeutic Innovation, Paris, France (LERMIT).

She was the 2000 Sato Memorial International Award recipient of the Pharmaceutical Society of Japan, and the 2001 Nolan and Gloria Sommer Award Winner (University of Nebraska).

In 2020 she received the Alfred Burger Award in Medicinal Chemistry of the American Chemical Society.

2015 Karcher-Barton-Aldrich Award Lecture, The University of Oklahoma, Department of Chemistry and Biochemistry

The Institute for Therapeutics Discovery and Development