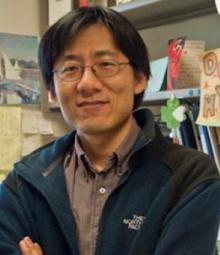 We are interested in understanding the molecular networks that coordinate nutrient metabolism and cell growth. How cells assess nutrient- or energy states and relay this information into appropriate decisions on growth is poorly understood. Coordinate regulation of nutrient metabolism and cell growth is of fundamental importance, and many human diseases, such as cancer, diabetes, and developmental disorders, are affected by alterations in this process.

Our research is focused on the mTOR signaling network that plays a crucial role in controlling cell growth in response to nutrient levels and growth factors. mTOR binds several proteins to form two distinct protein complexes. mTORC1 (mTOR complex 1) contains raptor (KOG1 ortholog), Gbl/mLst8, PRAS40 and DEPTOR, whereas mTORC2 (mTOR complex 2) conatins rapamycin insensitive companion of mTOR (rictor) (Avo3 ortholog), GbL/mLst8, Sin1 (Avo1 ortholog), PRR5/protor and DEPTOR. In spite of considerable efforts, it has not been possible to obtain a clear understanding of the molecular mechanisms by which the mTOR network is regulates by nutrient- and growth factor-signals. Utilizing novel molecular biology and biochemical tool as well as a variety of structural approaches, we identify novel components and connectivity in the network and determine biological functions and signaling specificity thereof. Our recent studies have led us to identify PRAS40 and PRR5 as key components of mTORC1 and mTORC2. We investigate the functions of these newly-identified components in the regulation of cell growth and metabolism with links to human diseases such as cancer and diabetes. We anticipate this study will advance our understanding of the molecular bases underlying the coordinate regulation between metabolism and growth during animal development and the pathogenesis of metabolic diseases such as cancer and diabetes. 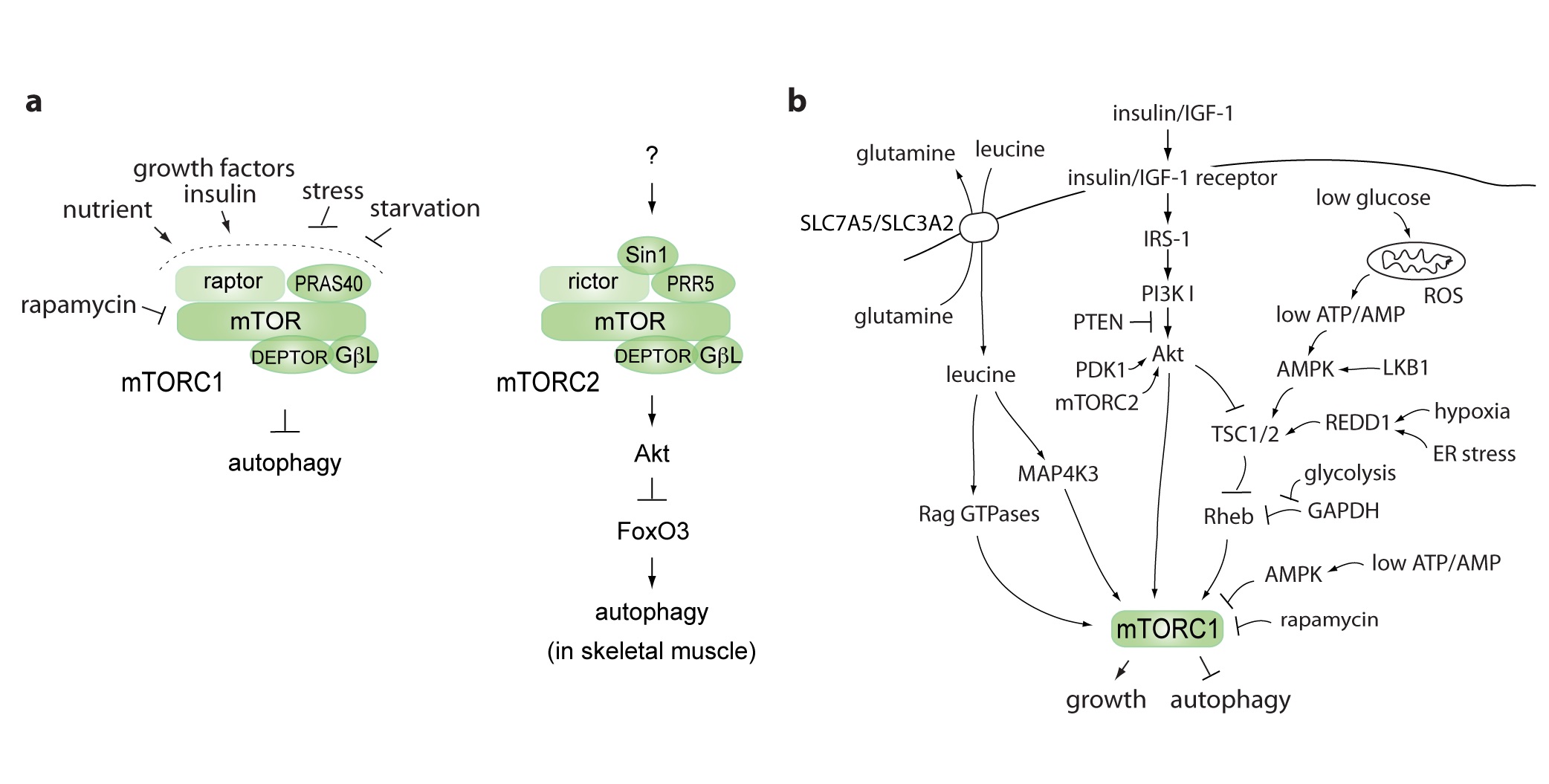 As a crucial pathway downstream of mTOR, autophagy (cellular self-eating) plays an important role for metabolic homeostasis and cellular survival. Autophagy is an evolutionarily-conserved process through which cytoplasm, organelles, or long-lived proteins or protein aggregates are sequested in a double-membrane structures and subsequently degraded in lysosomes. Through destruction of cellular organelles and proteins, autophagy provides energy for starved cells or allows for balanced regulation between biogenesis and degradation of cellular structures, thereby playing important roles in growth, survival, differentiation, and development. Dys-regulation of autophagy is associated with many human diseases including cancer, myopathies, innate immunity, and neurodegenerative diseases such as Parkinson's and Huntington's diseases. Autophagy is induced when cells are starved of nutrients or mTOR is inhibited. Our recent study revealed that ULK1 and ULK1 protein kinases play key roles in autophagy induction in mammalian cells. We determined that mTORC1 phosphorylates ULK1 and ULK2 to inhibit the kinase functions. Later, studies from other groups identified that AMPK phosphorylates and positively regulates ULK1. We investigate how mTORC1 and AMPK regulate ULK functions with focus on its phosphorylation and its interaction with Atg13 and FIP200. We also study the shared and distinct functions of ULK1 and ULK2 in autophagy and non-autophagy processes.

Protein stress, such as misfolded protein aggregates and oxidized proteins, occurs in many human diseases, including cancer, diabetes, neurodegeneration, and age-related pathol- ogies. One major source of protein stress originates when the ribosomal protein synthesis is upregulated with a consequential reduction of translational fidelity, producing defective ribosomal products. Prevalent in many cell growth disorders, such cancer and tuberous sclerosis complex (TSC), mutations of PTEN (phosphatase and tensin homolog), RAS, TSC1 (tuberous sclerosis complex 1), or TSC2 commonly enhance the activity of mTORC1 (mechanistic target of rapamycin complex 1). Hyper-activation of mTORC1, the central regulator of the ribosomal protein synthesis, can reduce translational fidelity as a result of increased rates of ribosomal elongation. The resulting aberrant proteins, if not properly removed, can cause cell death or contribute to human diseases.

Our recent study showed that mTORC1 promotes the formation of immunoproteasomes for efficient turnover of defective proteins and cell survival. mTORC1 sequesters precursors of immunoproteasome beta subunits via PRAS40. When activated, mTORC1 phosphorylates PRAS40 to enhance protein synthesis and simultaneously to facilitate the assembly of the beta subunits for forming immunoproteasomes. Consequently, the PRAS40 phosphorylations play crucial roles in clearing aberrant proteins that accumulate due to mTORC1 activation. Mutations of RAS, PTEN, and TSC1, which cause mTORC1 hyperactivation, enhance immunoproteasome formation in cells and tissues. Those mutations increase cellular dependence on immunoproteasomes for stress response and survival. The results have defined a mechanism by which mTORC1 couples elevated protein synthesis with immunoproteasome biogenesis to protect cells against protein stress. The novel pathway (mTORC1-immunoproteasome) may regulate many other cellular and physiological processes, and its disturbance may lead to human diseases associated with cancer, neurodegenerative diseases, and autoimmune diseases. 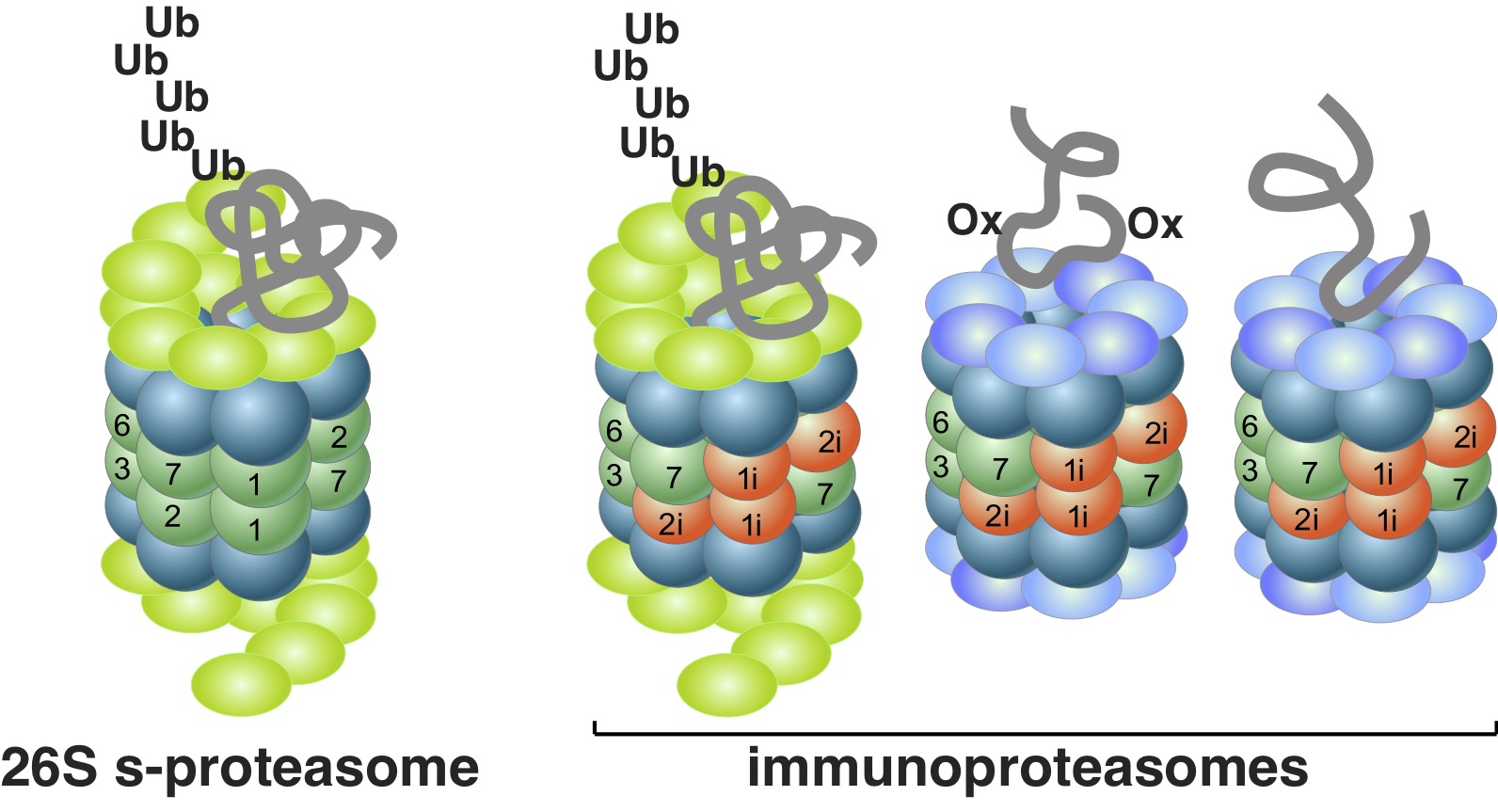 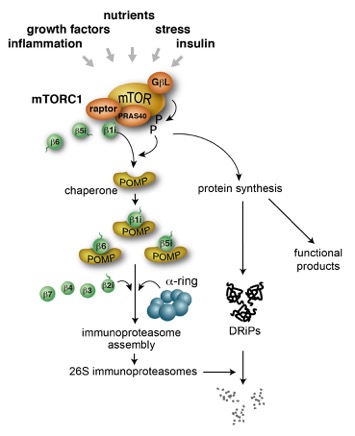