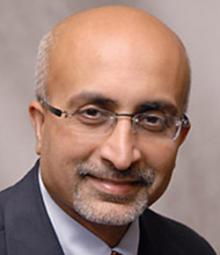 Dr. Badrinath Konety serves as Associate Dean for Innovation. He is also a professor in the Department of Urology and Director of the Institute for Prostate and Urologic Cancers.

Konety is a fellow of the American College of Surgeons and the American Urologic Association. He also is secretary/treasurer of the Societe Internationale d’Urologie (US Section). He has published more than 120 peer-reviewed articles, as well as a number of book chapters and review articles. He is on the editorial board of several journals and is a member of multiple guideline panels. He has been awarded a number of grants from the DOD, NCI, ACS and CDC. He is recognized as an expert on prostate and bladder cancer. He has given presentations on a wide range of urologic oncology topics nationally and internationally. He has been listed on the Best Doctors in America since 2009.