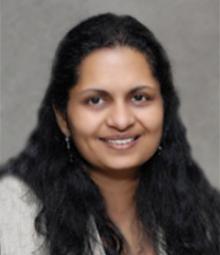 Dr. Kelekar’s laboratory is focused primarily on altered metabolism in cancer, a fairly new field of research. The way metabolic pathways operate differently in malignant versus healthy tissue is proving to be one of the hallmarks of cancer. Kelekar initiated her work in cancer metabolism while studying the mechanisms underlying apoptosis or programmed cell death, specifically the role of bcl-2 and other protein families in regulating apoptosis. Interactions between bcl-2 proteins and the bcl-2 homology domain 3 (BH3)-only proteins are pivotal in regulating apoptosis. Dr. Kelekar’s group discovered that the BH3-only protein Noxa, a canonical death-promoting protein, for example, also plays a role in cancer cell metabolism. Noxa is induced in response to apoptotic stimuli in most human cells of epithelial origin but is constitutively expressed in proliferating myeloid and lymphoid cells and required for apoptosis in response to glucose stress. Kelekar and her colleagues identified a serine on Noxa that was phosphorylated by the kinase Cdk5 in myeloid and lymphoid cancers. This amino acid modification inactivates Noxa’s apoptotic or cell-killing function, potentially giving tumor cells that can employ this mechanism a survival advantage.

Cells can use glucose to trigger the apoptosis avoidance mechanism such as the one enabled by Cdk5-inhibited Noxa. Kelekar and her colleagues propose that the serine residue on Noxa can serve as a glucose-sensitive “toggle switch” controlling both proliferation and apoptosis in leukemias and lymphomas. Normal cells use glucose for the energy-generating chemical reactions that take place in mitochondria through the TCA (tricarboxylic acid) cycle. Kelekar has found that Noxa expression promotes diversion of glucose for the production of biomass and that mitochondria of Noxa-overexpressing cancer cells, as well as proliferating normal cells, use the amino acid glutamine rather than glucose to supply the cell’s energy needs. Interestingly, it turns out that Noxa regulates multiple metabolic functions in leukemia cells in addition to regulating glucose and glutamine utilization. Metabolomics tools can now be employed to delineate the metabolic signaling pathways that normal and cancer cells employ to carry out critical biochemical functions. Sorting out the highly sensitive metabolic needs of cancer cells and targeting key molecules like Noxa constitute a promising avenue for small-molecule drug development.

Mechanisms of Apoptosis
Research in my laboratory focuses on pathways of cell survival and death with special emphasis on Bcl-2 family proteins as regulators of these pathways. Interactions between multi-domain Bcl-2 proteins and members of the BH3-only Bcl-2 family sub-class are pivotal in promoting cell death. Recently, our studies on human BH3-only protein, Noxa, have revealed a post-translational regulatory pathway that suppresses its pro-apoptotic function and imparts to it a novel metabolic and pro-survival role in human hematological malignancies. We are currently investigating the role of this protein and its binding partner, Mcl-1L, in regulating glucose metabolism in leukemia cells. The recognition that cancer cells exhibit altered metabolism and depend heavily on glucose as their major source of energy is leading to novel therapeutic strategies targeted at glycolytic (glucose breakdown) pathways. Major research areas in the laboratory are briefly described below:

Autophagy – its role in cell survival and tumor progression
DNA damaging drugs induce apoptosis via the intrinsic pathway through apoptosome formation and caspase-9 activation. MCF-7 breast cancer cells show little to no caspase-9 activation and a delayed death response response to DNA damaging drugs. Further investigation identified autophagy or “self-consumption” as the underlying mechanism for the delayed apoptotic response. Our studies suggested that reduced autophagy may be an adaptive strategy in immortalized and non-invasive breast tumor cells faced with genotoxic stress and underscored the need for autophagy inhibitors in combination with conventional chemotherapeutic drugs in treating early breast cancers (Abedin et al 2007). We are currently focusing some of our research efforts on the contribution of defective autophagy to tumor initiation and progression in breast cancer.

In collaboration with the group of Dr. S. Ramakrishnan at the University of Minnesota we have investigated the mechanism of action of the angiogenic inhibitor peptides, kringle 5 and endostatin, in human endothelial cells. These studies (Bui-Nguyen et al2007 and 2009) suggested that both kringle 5 and endostatin induced an apoptotic as well as an autophagic response in endothelial cells, but interfering with the autophagic survival response sensitized cells to the anti-angiogenic effects of the inhibitors by promoting a switch to robust apoptotic cell death.

BH3-only protein, Noxa – its role in apoptosis and glucose metabolism in leukemia cells
We are currently investigating the post-translational regulation of a human BH3-only protein, Noxa, in hematological malignancies. Human Noxa in stably and constitutively expressed in a majority of leukemia cells and kept in check through post-translational control mechanisms. Interaction of Noxa with its pro-survival binding partner Mcl-1L plays a major role in the apoptotic response of proliferating lymphoid and myeloid leukemia cells to glucose deprivation. We show that, in the presence of adequate glucose, human Noxa is phosphorylated on serine13 by the cyclin dependent kinase, Cdk5, and sequestered within large multi-protein cytosolic particles (Lowman et al2010). Apoptotic triggers, particularly glucose limitation, dephosphorylate Noxa, unmasking its pro-apoptotic function. An understanding of how Noxa is post-translationally regulated will aid in the design of therapeutic strategies that target the modified protein and promote its release from sequestration. Paradoxically, modified sequestered Noxa stimulates glucose consumption and lactate production in T acute lymphocytic leukemia (T-ALL) cells. Our observations point to a novel ‘survival’ role for Noxa in regulating glucose metabolism in cancer cells; specifically our data point to a role for Noxa in the anabolic pentose phosphate pathway that is crucial for dividing cells. Additionally, we have identified the protein components of two Noxa/Mcl-1L-containing complexes from proliferating leukemia cells by mass spectrometry and are currently investigation their function.

Noxa, a canonical tumor suppressor like other BH3-only proteins, had not previously been associated with a survival role. Our studies reveal Noxa as the second BH3-only protein, after family member BAD, to be attributed a metabolic function and underscore the intriguing possibility that other BH3-only members may hold day jobs as pro-survival proteins.